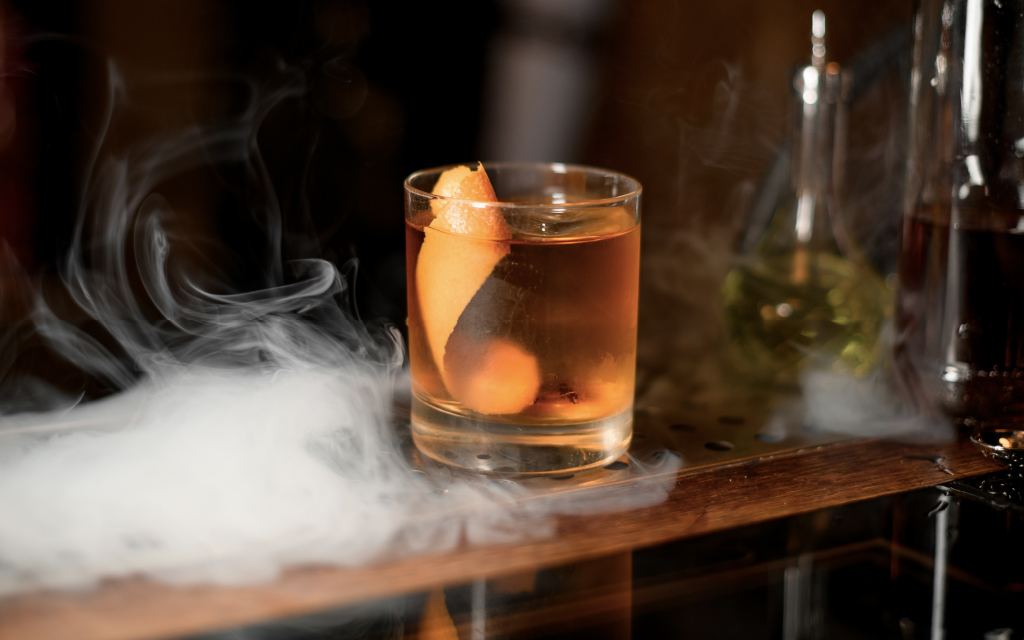 Want to skip ahead? Here’s what we’re covering today:

First let’s talk about zero carb options. I’ll be honest: your options are a little bit limited here, as most cocktails require some sort of sweetener to balance out bitterness or acid. But don’t dismay, you’re not completely out of luck! Here are some “no carb” options that you can order at nearly any bar.

With most distilled spirits, virtually all carbs are removed during the distillation process, so most spirits served without mixers have zero carbs. You can enjoy a little night cap of your favorite spirit on the rocks (ice) or neat (no ice, not chilled) without adding many calories or any carbs.

But be careful with rums (especially spiced rums) and flavored spirits! It’s not uncommon for these spirits to have extra sugars added after distillation. Unfortunately the label on the bottle won’t usually tell you whether that’s true, so I’d generally recommend steering clear of these two categories just to be safe.

An easy alternative to a sugary cocktail, Highballs are a category of cocktails that are made with a spirit of your choice and soda water. If you’re looking for something that’s low carb and super simple, this is about as simple as it gets.

A Rickey is similar to the Highball but with a little more flavor (and acid) from fresh citrus (usually lime). Play with citrus zest for even more flavor. Add a bit of mint, and you’re very close to a Skinny Mojito. The citrus will give it a more tart flavor, so choose a Rickey if you tend to appreciate more citrus-forward cocktails.

Get Creative with your Highballs and Rickeys!

You aren’t limited by the formulas above – the world is your oyster with these two cocktail categories!

All of the above add flavor but don’t add any carbs at all. 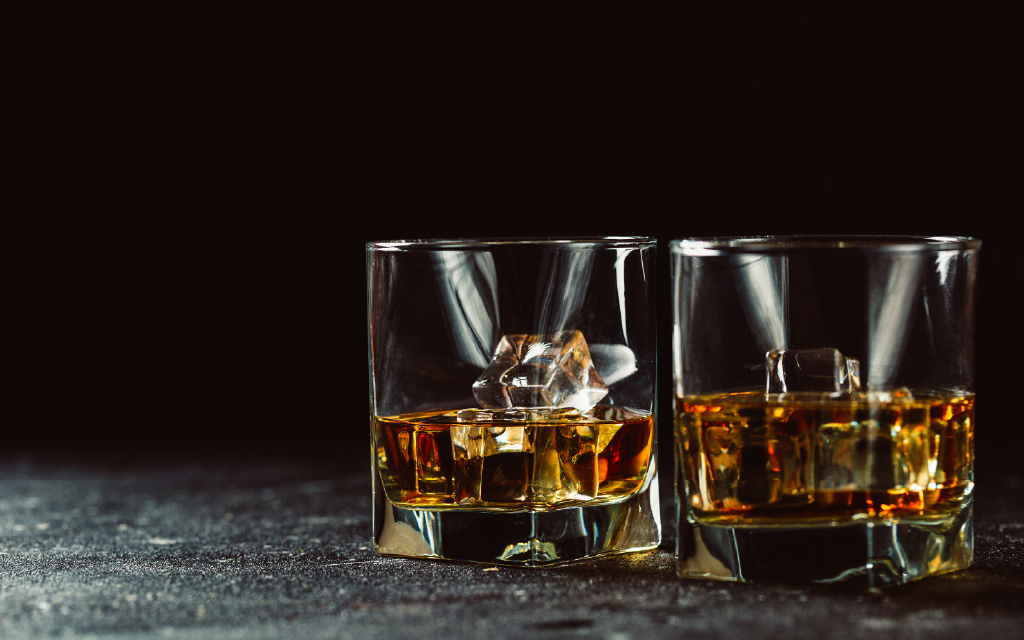 From beer to wine to cocktails, you have a wide range of low-carb alcoholic drinks to choose from depending on your alcohol preference. Note that all of the options below contain some carbs, they are still relatively low in sugar.

In general, beer is the opposite of low-carb, so if you’re a beer lover but want to reduce your carbs, you’ll have to look carefully. Anything labeled “light” is going to be a better option than traditional beer, and a light beer typically has the same amount of carbs as a glass of wine.

Thanks to the craft beer phenomenon, you’re not stuck with the same flavorless brands you’ve seen for the last 30 years. New breweries that produce really delicious beer are also offering low-carb and low ABV (alcohol by volume) options. By the way, there’s no legal definition of a “light” beer (that I know of), so you may want to verify your “low carb” beer really is.Some good options I’ve seen include Dogfish Head, Lagunitas, Allagash, and Kona Brewing.

Naturally lower in carbs than beer, wine is a good alternative to spirit-based drinks and still allows you to stick to your low-carb diet. If you want to cut the carbs, make sure to stick with drier wines rather than the sweeter ones (I’m looking at you, Riesling). Here are some of the best wine varieties for you if this is your alcoholic drink of choice.

While “Martinez” is a cocktail recipe, it’s also a name for a category of cocktails that roughly follow a similar formula: Spirit, fortified wine, and bitters. Spirits are typically zero carb, bitters are virtually zero carb, and Vermouth only adds 4.5g (sweet) or 0.5g (dry) of carbs per ounce.

Here are some of our personal favorites, including classic Martinis (both Gin and Vodka) as well as the Martinez itself:

This original Martinez cocktail is considered the precursor to the Martini. It’s spirit forward and a little on the bitter side, but absolutely delicious.

*Note: Maraschino is a liqueur and therefore high in carbs. But this cocktail doesn’t require much, and you could choose to omit it if you prefer.

An absolute classic, this gin Martini is about as classy and classic as you can get. Want it lower carb? Just make it “dry-er” by reducing the Vermouth and adding more gin in its place.

Substituting vodka for gin, you can make a Vodka Martini instead… Just don’t be tempted to add carb-loaded ingredients like flavored vodka or chocolate syrup!

Using Sweet Vermouth instead of dry and rye whiskey instead of vodka or gin, the Manhattan is a great option if you kind of feel like a Martinez but prefer a slightly sweeter profile. (This is one of Chris’ favorite cocktails of all time!)

You may not be familiar with the term “Daisy” cocktails (I sure wasn’t!), but I bet you’ve actually had a Daisy without even knowing it! (Did you know the classic Margarita is actually a “daisy”?) These cocktails follow the format of spirit + acid + Triple Sec. There are so many varieties you can create by changing the liquor or acid component, but here are a few traditional alcoholic Daisy cocktails we recommend:

Arguably the most common “Daisy” cocktail, the classic Margarita combines tequila (spirit) and lime juice (acid) with Cointreau (triple sec). This version has much fewer carbs than other Margarita recipes because it doesn’t use Agave Nectar, syrups, or high sugar drink mixes. (See my rant – err – note below about the “Skinny Margarita”)

Going to a bar and just ordering a cocktail “skinny” sounds like a good idea, but you may not be getting something “low carb” at all. As we learned with our Skinny Margarita recipe, many bartenders use Agave nectar in skinny cocktails. Agave nectar is commonly believed to be healthier, but it doesn’t actually have fewer carbohydrates than other sugars or syrups.

That doesn’t mean you can’t make a skinny version of your favorite alcoholic drink, though. There are more effective ways, which I’ll explain below. Meanwhile, be sure to ask your bartender how they make their “skinny” cocktail. Don’t be afraid to ask questions and find a cocktail for your low-carb goals that still tastes delicious.

An underrated classic in my book, the Sidecar is similar to a Margarita but uses Cognac  rather than tequila.

Note: The traditional Sidecar recipe calls for a sugar rim as well, but if you’re going “low carb” you are definitely going to want to skip it!

Not for the faint of heart, the White Lady is a classic cocktail involving egg whites. Although it seems like egg white cocktails are all the rage these days, the White Lady dates back to at least 1930. Personally, I find it a little on the tart side – so it’s a good choice if you tend to like citrus forward drinks. 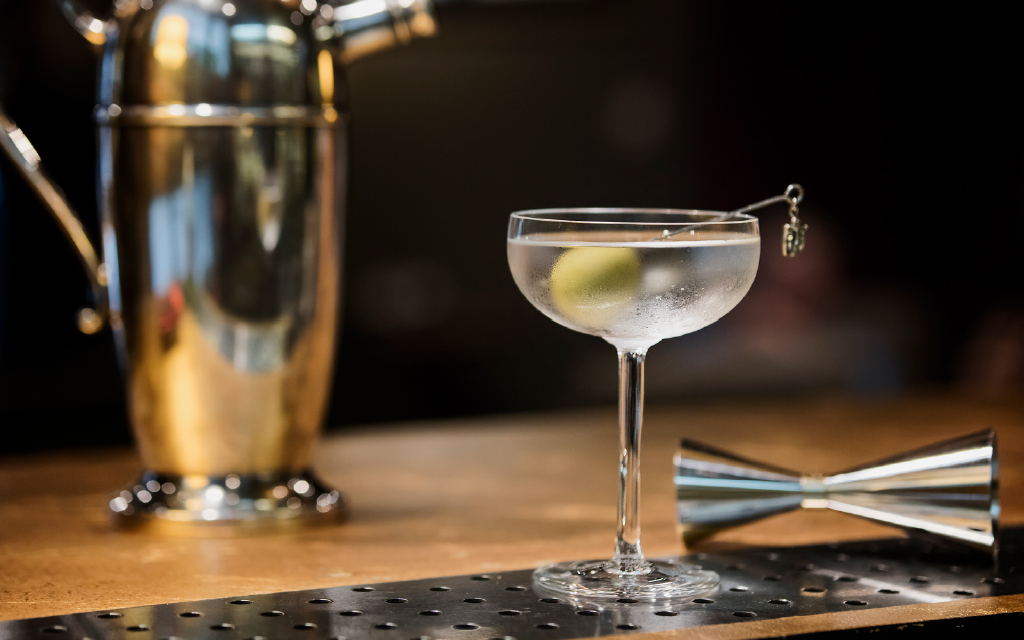 Making it “Skinny” with No Calorie Sugars

If you’re not seeing your beloved cocktail in the list above, I have good news for you. Modern sugar alternatives have come a long way, and there are some great options that work well in cocktails. (Check out this post all about sugar free simple syrup to learn more.)

To cut to the chase, you can make a sugar-free simple syrup with Xylitol or Stevia and it’ll work nearly as well in cocktails as your traditional sugar simple syrup.

Let’s start with the basics!  A huge number of cocktails call for simple syrup, so this is a good place to start. and it couldn’t be easier. We liked Xylitol Simple Syrup the best, but it came out to $3 / cup! Stevia was a close second and only $0.35 / cup – so another good one to consider.

Use this Simple Syrup to make:

Once we’d established that Xylitol made the best tasting sugar free simple syrup, it was only natural to take that one step further and get creative with flavors. When making a Penicillin cocktail, we substituted the honey syrup for a ginger Xylitol syrup.

Use Ginger Syrup in the Penicillin cocktail, or substitute it into other drinks that call for simple syrup. Better yet, keep scrolling and turn it into your very own sugar free Ginger beer!

If you want to get creative and make your own light “ginger beer” for a Moscow Mule or other alcoholic drink, we made a pretty good substitute! Below is the very basic recipe, but we made a detailed video for you if you prefer to watch and learn.

Ginger beer opens up a world of possibilities in cocktails! Here are a few of my favorites:

If you don’t know what Oleo Saccharum is, it’s cool – skip this section. But if you do, then you know we really played with the limits of Xylitol in January, didn’t we? When testing a variety of skinny Margaritas, we also made an Oleo Saccharum syrup with it, using orange zest.

Oleo Saccharum is an awesome way to kick up the orange flavor in lots of drinks that use triple sec, or things like punches.

You still have so many (many) options of alcoholic drinks when you’re trying to cut the carbs. If you’ve read this far you’ve seen there are literally dozens of options, especially if you’re willing to branch out and experiment with sugar substitutes or try a new-to-you, naturally low-carb cocktail you’ve never tried before. (No really, come tell our Facebook community how you like the White Lady!).

Of course, you also have wine and beer options that still meet the low-carb requirements and give you something easy to bring to a get-together or to order at dinner.  So break out the spirits, soda water, and maybe even a bit of stevia or Xylitol – the cocktail options are endless!  And don’t forget to come tell us all about it in the Craft Cocktail Club! 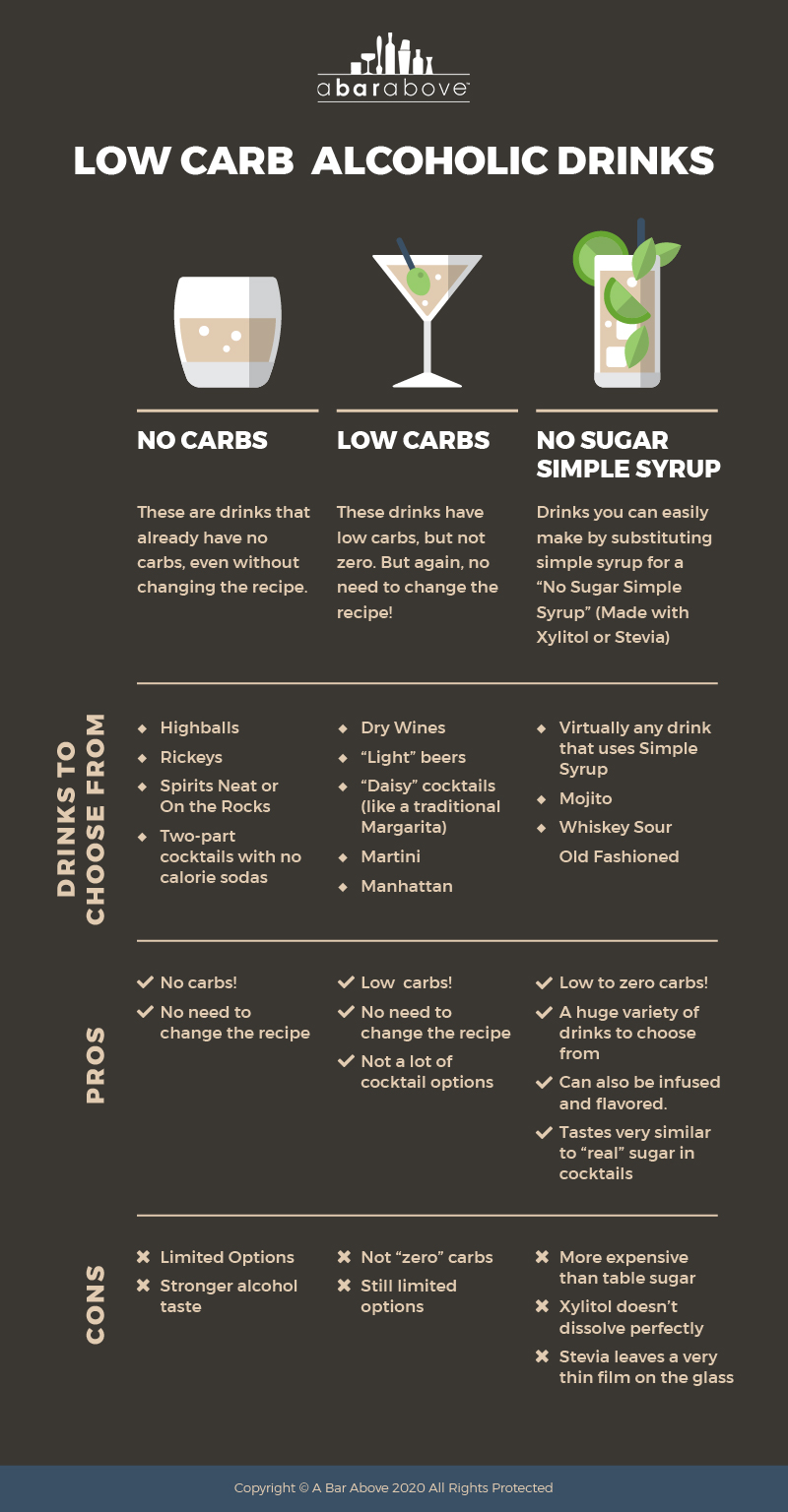