What’s the difference between “Liquor” and “Liqueur”?

For beginner bartenders and consumers, the words “liquor” and “liqueur” appear confusingly similar. To make matters worse, they do have a lot in common: both are common bar ingredients and you can buy both of them in a liquor store. (As far as I know, no liqueur stores exist – yet!) But when using them in cocktails, these two ingredients could not be more different – and mixing them up is a recipe for one awful cocktail!

Pronounced like “Licker” – Emphasis is on the first syllable

“Liquor” can be used interchangeably with words like “spirit” or “hard alcohol”. In order to be considered a spirit, a beverage must be alcoholic and distilled. (So beer and wine don’t count.) Technically speaking, liquors should not have sugar added – though you do sometimes see small amounts of sugar added to some liquors, especially rums. (Each specific type of liquor may have its own regulations on how much sugar is permitted.) Regardless, it will be very little sugar overall. In addition, liquors are relatively high-proof. While I was unable to find a definitive “standard minimum” ABV, most liqueurs are over 20% ABV at a minimum.

Example liquors you are probably familiar with include Vodka, Gin, Tequila, Brandy, and Whiskey.

Caveat: especially recently, we’re seeing a lot of new flavored spirits hitting the market – like cupcake flavored vodka, flavored brandies or cinnamon flavored whiskey. Almost without exception, when flavor is added to spirit, quite a bit of sugar is added as well. These are still considered “spirits” because of their high alcohol content, but their overwhelming sweetness could arguably move them into the “liqueur” category as well.

How Liquors are Made:

Quite simply, liquors are made through distillation. First, an alcoholic mash or liquid will be made by fermentation – similar to how wine or beer is made. Then this mash / liquid will be put into a still where the alcohol will be extracted in relatively high concentration. (The exact concentration depends on a lot of factors that I won’t go into here – but it’s high!)

The resulting “distilled spirit” may then be aged, have flavoring added, be distilled again, or be watered down to “bottle strength”. If flavoring or sugar is added, it should be relatively minimal. (With the exception of the “caveat” above.)

Liquors are the backbone of cocktails – they typically make up a relatively large proportion of the overall drink. In most cocktail recipes, you will only see one liquor – for example, it will be a “tequila” cocktail like a Margarita. It’s rare (but not unheard of) for a cocktail recipe to include two different types of spirits, like pairing whiskey with vodka. This is especially unusual in classic cocktails.

The most important thing to know about liquors when using them in cocktails is that they will make your drink taste “hot” or alcoholic. This is one of the things recipe designers will work to balance out when creating a cocktail recipe – you want the final cocktail to have some alcohol taste, but you don’t want it to be overwhelming. On the other hand, liquors only bring a small amount of flavor (depending heavily on the type of spirit), and bring very little sweetness.

Again: if you’re using a flavored spirit in a drink, taste it first! You may be adding a lot more sugar than you intended.

Pronounced in two ways: “lick-keewr” or “lick-oor” – Emphasis is on the second syllable.

Despite common usage, a “liqueur” is NOT the same thing as a liquor. Sadly this is a common mistake, so take care when using it (or hearing it) or you may end up surprised!

In the most over-simplified version, liqueurs are Liquors which have had sugar and flavor added. (Hence my “caveat” comment in the liquor section above – and why this has become so confusing!) They are also typically (but not always) lower in alcohol content than liquors, at least partially due to the “watering down” affect of adding said sweetener and flavor. Another common characteristic of liqueurs is their “syrupy” consistency – they are very often much thicker and more viscous than liquors.

You are probably seeing where the confusion comes from – this article already has about three “caveats” and “exceptions” already! One thing can be said for sure: it can’t legally be called a liqueur unless it brings flavor and sugar. So if the bottle says “liqueur”, you can at least count on that.

Note: Most of what I know about liqueurs I learned from Camper English – thanks Camper!

How Liqueurs are Made:

Liqueurs are almost always made from liquors. A distilled spirit will have flavoring added, (either through maceration, infusion, or other methods), and will also have quite a bit of sweetener or sugar added as well. Some liqueurs have strict rules and regulations in the USA and EU (and elsewhere in the world) to give specific criteria for how much sugar may be used.

Liqueurs are a fairly common ingredient in cocktails, due to their ability to bring an amazing depth of flavor and complexity to a cocktail. They range from single-flavor liqueurs (like Peppermint Schnapps) to very complex (like Green Chartreuse) and give the cocktail creator a huge variety of flavors to play with – without having to keep a pantry full of fresh fruits, herbs and spices.

Sweetness and Flavor are the Key

While flavored liquors do create a “gray area” between liquors and liqueurs, for the most part you can tell what a beverage will be by looking at the bottle.

Want to get really nerdy? Here’s a bit of light reading for you straight from the US Alcohol and Tobacco Tax and Trade Bureau. (Get comfy!) 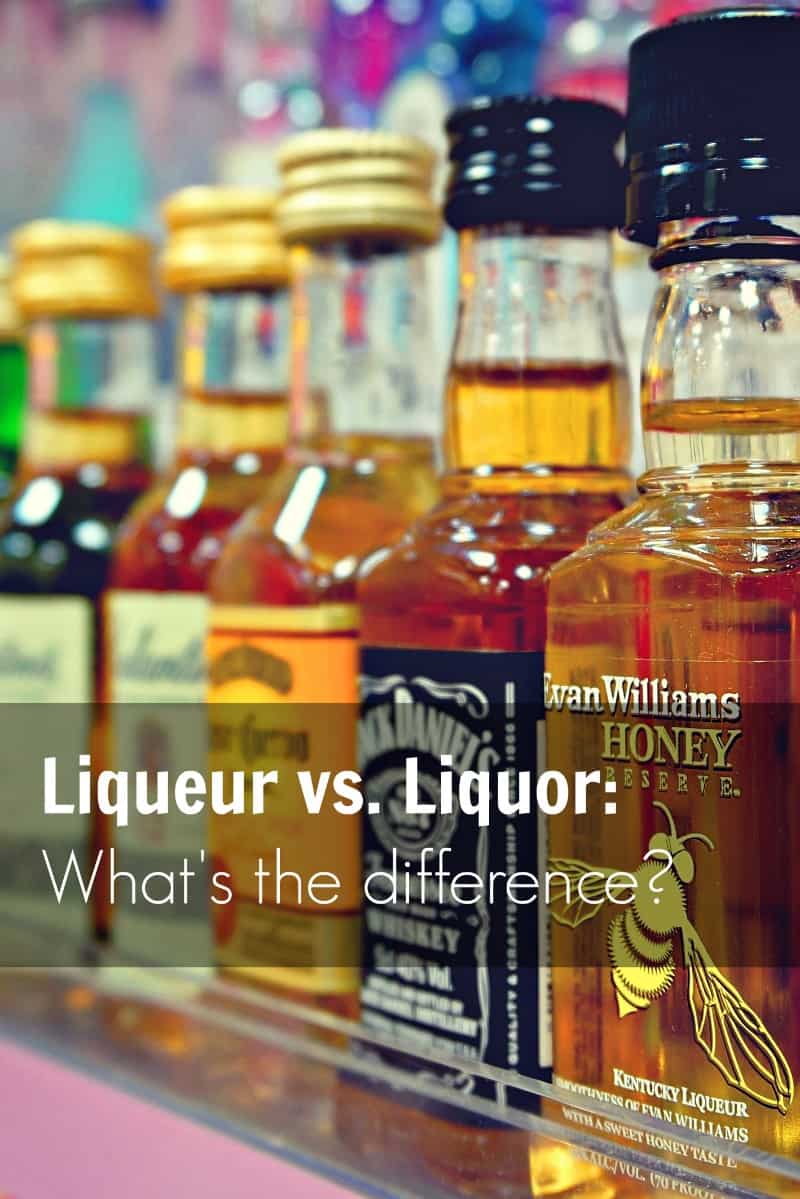