The Story of our Custom Hawthorne Strainer

You’re working your shift, day in and day out. And the tools you’re using just start to get on your nerves. After all, you’re making hundreds of cocktails a day! That’s a lot of time for those little nagging annoyances to really add up. It definitely happened to Chris when he was still working behind the bar. One of his biggest frustrations was with the various Hawthorne Strainers he used:

During his slower shifts he’d start to daydream about how he’d solve these problems. Every week it seemed, he’d come home with a new bar invention that would be SO much better than what he had at his own bar. But we were busy starting this blog and doing other things… so the daydreams remained daydreams.

But last year that all changed. We started Top Shelf Bar Supply and suddenly we were making our own bar tools… it was the perfect chance for Chris to dig up those old notes and finally fix some of the annoyances that plagued him. 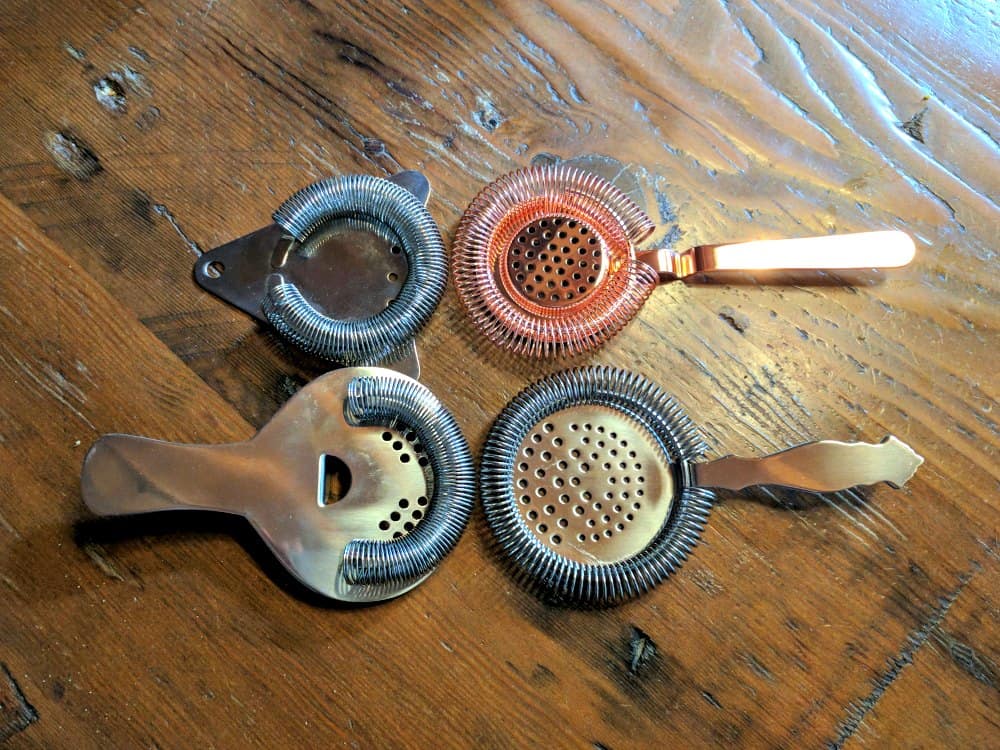 And so Chris set about to design his perfect strainer. The first task? Buy a bunch of other strainers and start testing!

Some of the problems were easily fixed by choosing a good factory. We didn’t need to design a good spring from scratch – we just needed to make sure the spring we bought was high quality metal and finely wound. Similarly with the body of the strainer. If it’s made with real Stainless 304 then it won’t rust. Easy.

No matter how strong your weld, it’s never going to be as strong as if the metal is one solid piece. So Chris sought to avoid welds wherever possible. A few strainers on the market used the punched-out body of the strainer bent outward as the “arms” to hold the spring. It looked good and didn’t break. Perfect.

1: Move the finger-hold closer to where the finger is naturally while straining

2: Cut away the extra metal that rubs against your hand 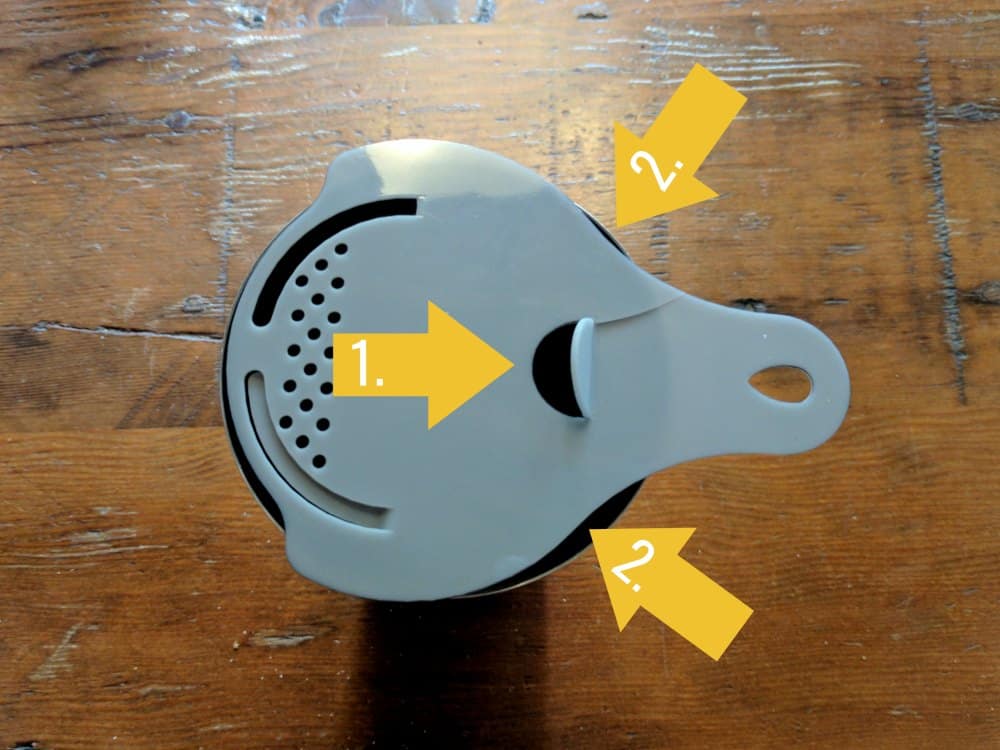 Wondering what that cracked plastic model is? Read on …

While the least important of his goals, Chris obviously wanted his strainer to look great – and unique. There were several iterations on style, but the key design traits he was looking for was compact size, simplicity and clean, smooth lines. It took a few tries but we got there eventually! 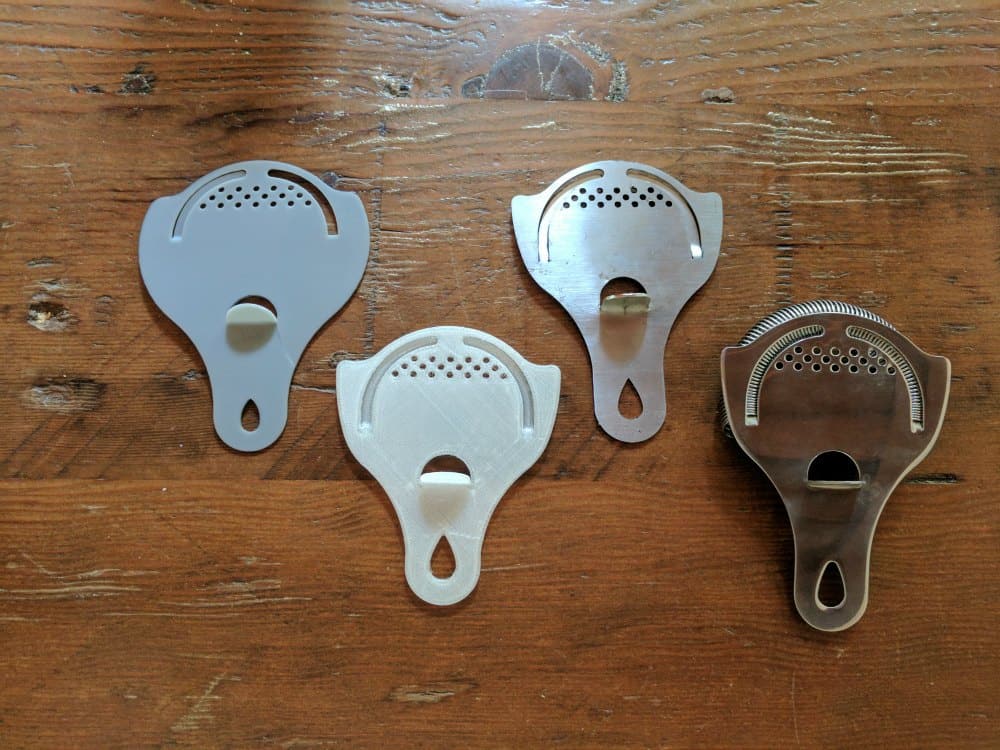 In addition to having access to a great factory in China, we had another BIG help with this project: My Dad! A retired mechanical engineer (or as I usually call him, mad scientist), my Dad has the ability to create 3d models of our ideal strainer – pulling, reshaping and moving things around in a digital file, long before we had anything physical. (Poor Chris had to spend quite a bit of time hanging out with his in-laws, but don’t worry – my Mom fed him well!)

Having a shiny beautiful strainer inside a computer is great and all, but it’s really hard to test it. Thankfully, 3d printing is a relatively cheap option nowadays – so we sent the design over to a 3d printer to create something we could hold in our hands and really test.

Unfortunately we quickly found that plastic is an awful material for a hawthorne strainer (no surprise there!) because the arms weren’t strong enough to hold the spring. They’d just break right off. (See photo above as evidence…) Our first few models were good enough to test how the strainer felt in your hand – but definitely not a good way to test how it actually strained a cocktail.

If you need something made out of metal, 3d printing is a terrible way to do it. Instead, we opted for getting sheet metal cut by a computer (CNC cut) and then manually bending the arms into place. These prototypes were rough, unsanded, and definitely not food safe. But they were good enough to give the strainer a “real world” try! 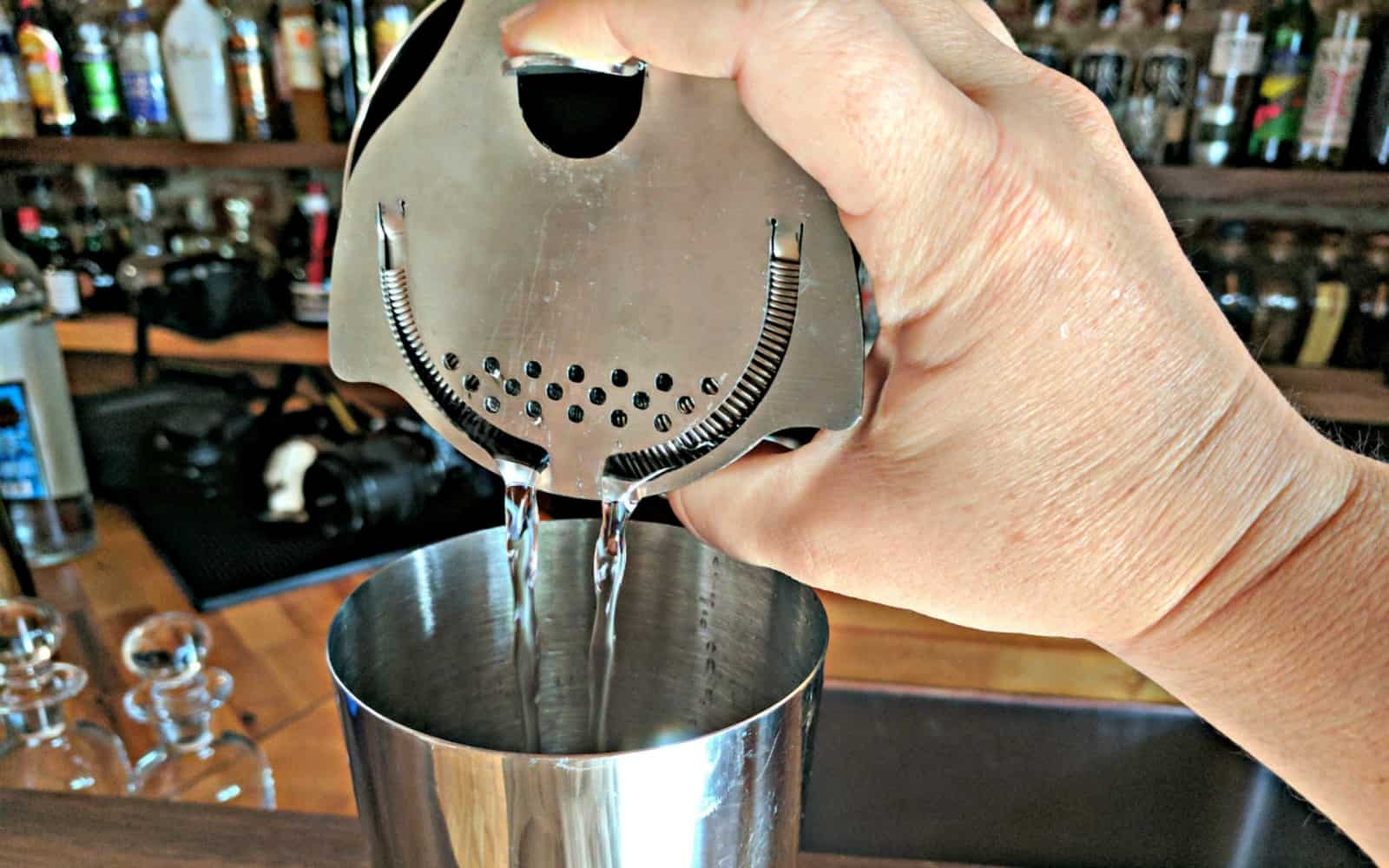 Disregard the awkward wrist posture – it’s hard to get a picture while straining at the same time! As you can see in this photo, the CNC prototypes were rough-cut. But they gave us enough to work with so we could do a “real world” test run. 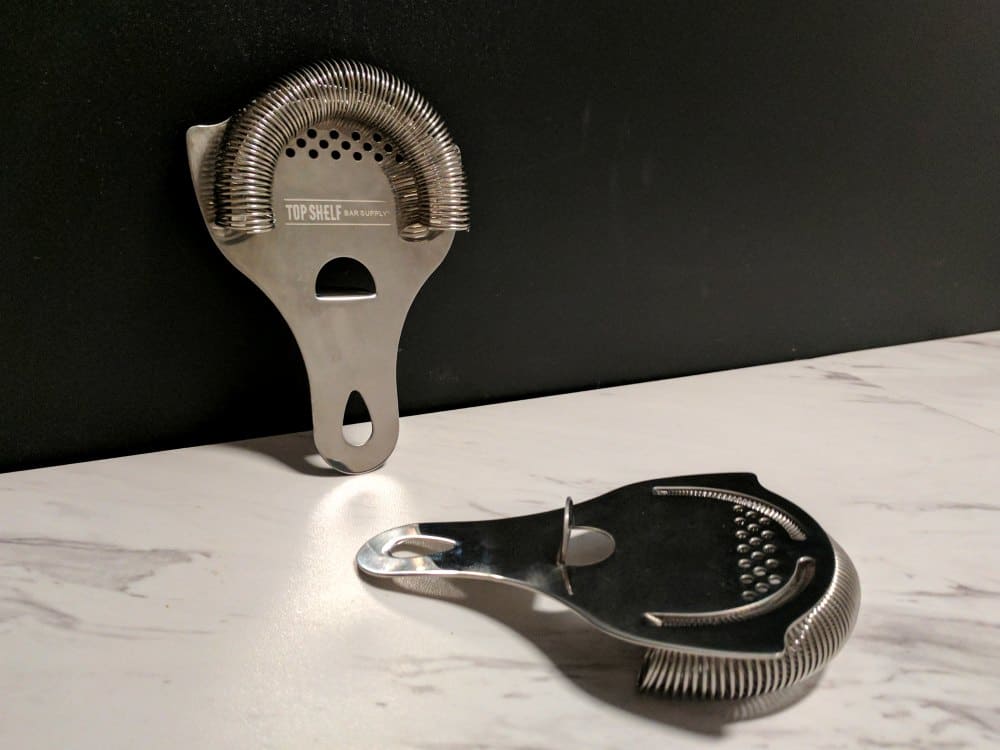 After many months of iterations, we finally had a design that Chris was happy with. But that’s just the first step: now we had to find a way to product it in a large scale. Thankfully we had a factory we were already working with to create our Cocktail Shaker – so that gave us a place to start.

I won’t pretend this process was easy – or cheap. Disregarding the hundreds of dollars we spent on getting the various prototypes made, it cost more than a thousand dollars more just to make the mold that would create our strainer en masse. (And that doesn’t cover the cost of producing a single strainer!)

We made the call and dug deeper into savings – Chris and I truly believed this strainer would be a permanent piece of our bar tool lineup, and would be a huge improvement for the bartenders out there still working behind the stick.

Nope, you’re not done yet. Getting the product made is great, but you also need to package it! Thankfully we had a great product designer from our other products and this step was (thankfully) fairly easy. Send photos, pay the invoice, and voila! Look at that beautiful box. (Seriously, we have the best designer!) 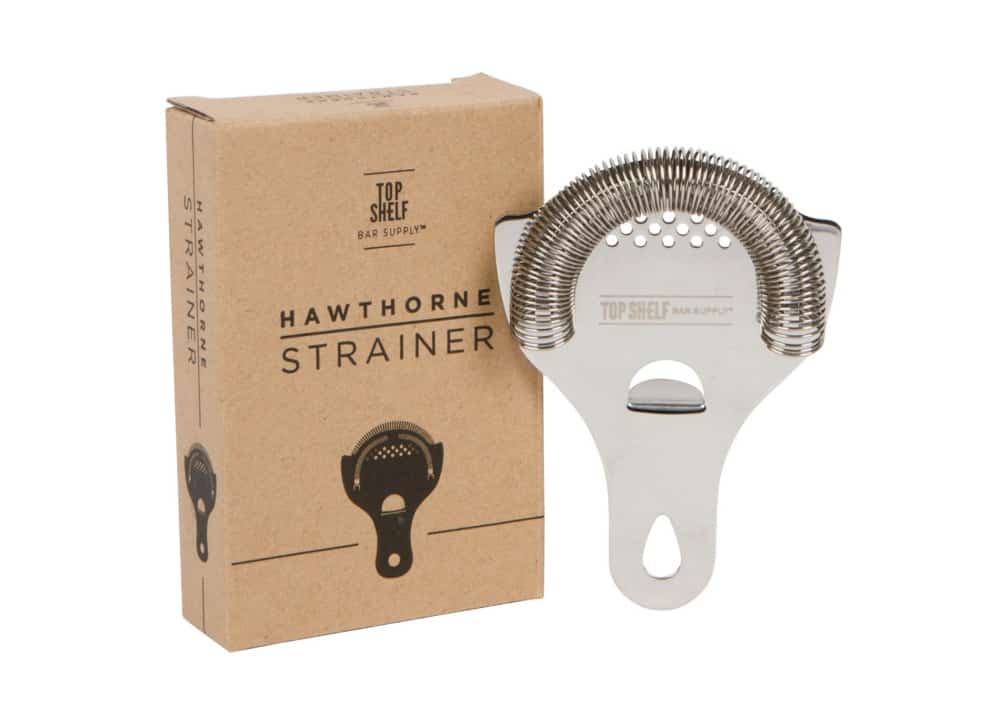 We started this project in the late Summer of 2016, and each version took several months to create, finalize, order prototypes, test, and revise. It was a long process but we eventually came to the design you see above. I know I’m totally biased, but dang. Is that not a good looking strainer?

I know it’s a long story, but I hope you’ve enjoyed it! It’s been a wild ride so far and we would absolutely love to hear your thoughts and feedback. After all – this isn’t just supposed to be Chris’ favorite strainer – it’s supposed to solve the problems that you are having behind the bar!

We’ve just launched a few weeks ago and we’re keeping the price low for a few more weeks while we get established. Check it out and definitely let me know what you think! 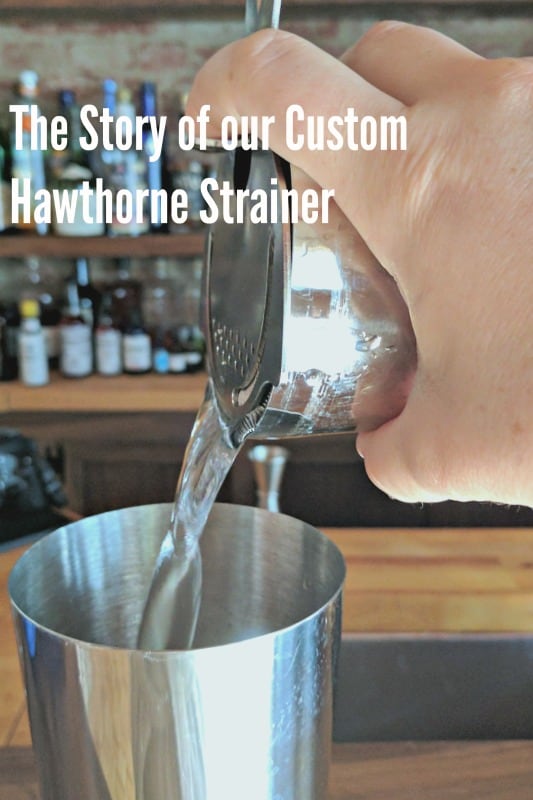