Practicing Presence: Four ways to be Present During Your Shift

Close your eyes for a moment, and think back to one of your slowest bar shifts. Do you remember what you were doing, or what you were thinking? Did you use your phone to escape lingering boredom or did you project yourself into a past or future scenario allowing your mind to take over?

As bartenders, it is so easy to get lost in the past or daydream about the future. We work long shifts, often ranging from eight to 12 hours. Some nights are so insanely busy we barely have time to take a bathroom break, let alone focus on being present. Other nights are tortuously slow and we find ourselves wondering if our shift will ever end. Time and time again we use our phones as a way to escape the present moment rather than surrendering to it and allowing it to be.

We live in a world that lures us hypnotized into its web; we are always ‘connected’ via our cell phones and social media, yet we are disconnected from our true selves and the present moment.

As a bartender, I have experienced this reality time and time again without ever really realizing how disturbing it truly is. Until one shift, a few months ago, there was a nervous man sitting at my bar. I asked him if he would like a drink and he quickly ordered a double whiskey neat. He took a large gulp while anxiously looking around the room and then down at his phone. It was obvious he was waiting for a date, seemingly someone he had never met before. Ten minutes later, a beautiful woman walked through the door.

He nodded, “Nice to finally meet you!” He exclaimed as they hugged quickly before sitting in front of me at the bar.

Ding. Her phone went off and without a second thought she began texting. “I’ll have what he’s having” she announced, never glancing up to verify he was even drinking something she liked. James was tapping his index and middle fingers against his whiskey glass, waiting for a moment to be able to begin their first in person conversation. Carla took a sip of her drink and continued to text. “Sorry, just one minute, my roommate is freaking out about this guy and I have to deal with it,” she said matter-of-factly.

“No worries, take your time.” He replied as he pulled his phone out and began scrolling Facebook.

For the next hour, they sat together as strangers only briefly glancing towards one another to exchange superficial information such as, “How long have you been living in New York City?” and “Have you met anyone else off of Tinder yet?”

The only consistent sounds were those emanating from their phones. After a few drinks, they said their goodbyes: “This has been so much fun. We will definitely have to do it again,” Carla said as she and her phone hugged James goodbye. He smiled and agreed, “For sure!” He replied automatically.

Position like a fly on the wall, I stood baffled. This way of breathing, but not truly living is becoming all too common in our world. We live in a time where connectedness has been bastardized by the invisible web of our world. Rather than sitting with ourselves, each other and our planet, we bury our heads into our cell phones comforted like a baby on its mother’s breast. We live for likes on our social media pages and spend hours scrolling through other people’s news feeds instead of being present.

James and Carla lost an opportunity to learn about each other, and develop a connection based on experiencing those now gone moments together. Something remarkable did come out of my experience serving James and Carla- I woke up.

Practicing Presence During your Shift

If you are anything like me, and you find yourself lost in thought, or hypnotized by the web of our world during your bartending shifts, here are four tips for how you can re-awaken the present moment and truly enjoy AND experience the next eight to 12 hours of your life:

Every second of every day brings a new opportunity for us to connect with ourselves, our coworkers and our customers.Do not let life and all of its blessings pass you by because you are living and working oblivious to the here and now. 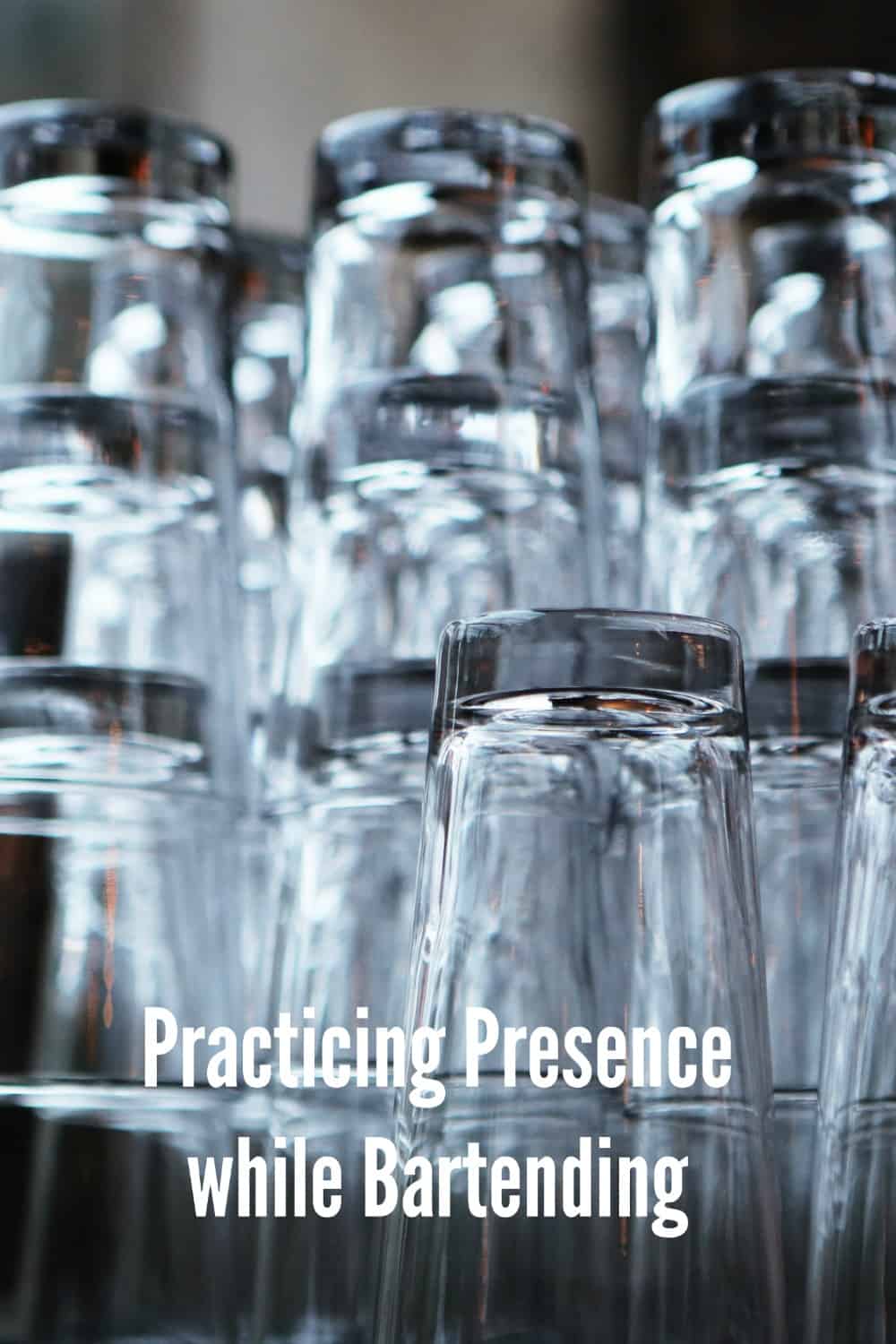