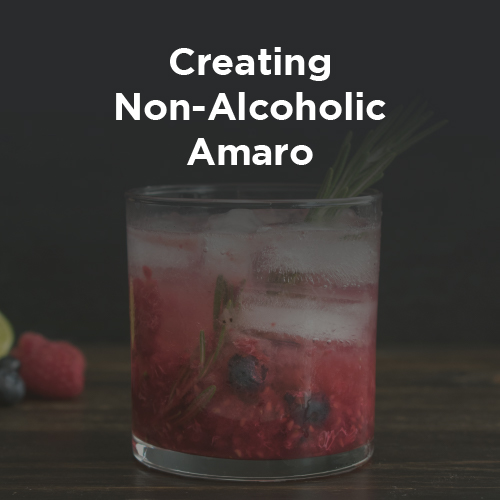 Welcome back to episode #176! We hope this post finds you safe and healthy. Recently I’ve seen a lot of posts online about people’s alcohol intake going up during quarantine, so this month we thought we’d focus on the “non alcoholic” side of things to offer a nice, refreshing option for those of us who want to take a little break from spirits but still have fun with our drinks.

Today on the podcast, Chris is talking with Jason LaValla, founder of Casamara Club, which produces “sparkling amaro soft drinks,” as he calls them. This isn’t a sponsored post, we promise! We did receive a free sample of Casamara Club and were really impressed, and Jason really knows his stuff when it comes to flavors, bitterness, and the challenges that come along with trying to make complex drinks without the alcohol.

This is a unique podcast, for sure. Jason is an amaro (and dare I say flavor) expert, so he has a lot of information to offer about flavor profiles and extractions for creating your own drinks. Here are the highlights:

Pulling inspiration from the rich history and cultural traditions of Italian amaro, Jason set out to combine the depth and complexity of Italian aperitivo and digestivo with the lightness of a refreshing soda and bitters. Casamara Club is available for national shipping (12 bottles for $36), in markets and also restaurants and bars throughout the country prior to the national shutdown (including Mister Jiu’s in SF, Antico in LA, and Olmsted in Brooklyn).

JASON’S INTRODUCTION TO AMARO & MAKING HIS OWN

Jason was intrigued by amaro when a bartender at a craft beer bar introduced him to it; the fact that a beer connoisseur was coveting this spirit piqued Jason’s interest — and laid the foundation of an entire company! He quickly began comparing different brands of amaro and analyzing what he loved about each style; his affinity for amaro soon grew into a job:

“I love Amaro, I don’t necessarily love my corporate job, so I’m going to become an Amaro-maker. Eventually. I think  what I found eventually, though, was that even more than I enjoyed trying to do my own brand new thing, what I really liked doing was looking at an amaro that I really liked and trying to recreate it in my own style.”

WHAT’S IN A FLAVOR?

This quickly led to an exploration of flavors in general… and a closet full of ingredients like orange peel, Angelica Root, and lavender. (This totally reminded me of Chris’ Flavor Library post from waaaay back in 2013). What better way to understand each individual property? Once he understood the flavor of each botanical on its own and could pick specific flavors out of more complex drinks, he began to mix and match to create his own flavor profiles.

If you’re going to make your own spirit, you have to get creative! Not only did Jason extract flavors from botanicals, but he also extracted from existing liquors. Definitely jump to minute 9:38 for advice on extracting from a high-proof, neutral alcohol, but now I really want to try an amaro made of extractions from Wild Turkey 101 (Jason’s favorite to extract from). But if you’re making your own amaro, Jason suggests creating tinctures from your ingredients that you can add to your base to make it “pop.”

THE GOOD & THE… NOT SO GOOD

Jason offers some solid advice about making your own amaro (or any spirit, really):

“[Be] ok with that fact that a lot of them aren’t going to be great. And that’s part of the benefit of starting small with individual extractions and blending them together.  […] It’s harder to make mistakes until you’re blending. And once you’re blending, you can be a little bit more […] judicious about how much you’re potentially wasting.”

As for failures, let’s just say this: Don’t try making molé bitters. (Or do, and make sure to tell us how it worked out for you! For a good laugh, check out minute 12:10.)

Even though Jason really loves amaro, I very much admire why he shifted his focus to making amaro sodas instead; because there were already several American companies that make amaro, Jason didn’t want to just repeat what is already being done. Instead, he drew inspiration from his daily habit of grabbing a seltzer water every afternoon. Soon, he began to analyze the soda water itself and combined his interest in amaro, flavor profiles, and these seltzers:

“I want a better quality, non-alcoholic drink that makes me feel maybe the way I can feel when I drink something with alcohol, something a little more lovingly crafted with flavor in mind as the primary goal. […] So many soft drinks, the primary goal is zero calorie or it’s, like, brain-boosting or gut health or energy drinks. They all have to be ‘functional’ in some way or the other, and I think they all end up losing sight of flavor. And I felt like that was the one thing I knew, was flavor. And that’s when I started making bitters with the idea of, like, bitters and soda should be in a bottle. Because that’s what I want to drink when I’m not drinking.” –Jason LaValla

SO HOW DO YOU EXTRACT FLAVORS WITHOUT THE ALCOHOL?

And so the idea of Casamara Club was born. As someone who regularly combines soda water with bitters for a fun mocktail, this concept is so refreshing to me! As Jason developed his non-alcoholic beverage, he had to find extractions from something other than spirits themselves. Unfortunately, you can’t exactly recreate this one at home because Jason works with a lab to get his non-alcoholic extractions.

Once he began working with a lab, Jason created 100-150 variations of each flavor, adding individual ingredients until it either fell apart or came together, slowly building on how each specific ingredient complemented everything else.

A BILLBOARD OF FLAVOR

As Casamara Club developed, Jason received some awesome advice from a mentor: If you only develop one flavor, you only get one spot on a store shelf. But if you create more flavors, you get a whole billboard of advertising! With that concept, Casamara grew into four flavors:

As one gentleman described it to Jason, it tastes like what you would give a sick horse. Whatever that means!).

THE PERKS OF THE MIXER

OK, so this amaro soda isn’t intended to be a mixer for cocktails, and we are talking about non-alcoholic options, after all. But Casamara Club sodas really add something special to a cocktail vs. a traditional, non-flavored soda water. But Jason wasn’t always keen on the idea:

“It took me way longer than I would care to admit before I was actually comfortable mixing these because you put something out into the world with a very specific idea of what it is and what it’s for, and for months the first question I would get was ‘Can I mix it? Is it for mixing?’ And I would say ‘No, drink it, drink it; I promise, it’s for drinking.’” But you start hearing that question often enough, and bartenders started coming to me like, ‘Hey, check out what I did,’ and that sort of got the juices flowing for me, like, ‘Oh, alright, maybe it’s a mixer, too.”

Because the Casamara Club sodas bring their own very distinct flavor, it’s super fun to play with them in a cocktail, which has the benefit of adding flavor without adding more alcohol (but don’t take my word for it– share with us if you make something yummy with them!).

Even though Casamara Club beverages add flavor, they still dilute a cocktail. Their concentrated syrups have been available to bars already; but since many bars and restaurants are closed right now, Casamara Club is offering their syrups on their site. But it’s a lot of syrup, so it may not be for everyone! So if ordering from them isn’t an option from you, creating your own concentrated syrup is a fun way to add flavor without diluting your cocktails.

There are a few retail stores that carry Casamara Club products, but if you aren’t near one, you can also order through their site. Of course, feel free to reach out to them on Instagram, and we’ll also keep you posted on the new It’s Not Right Movement that Jason mentions in the interview, which aims to foster a safer working environment in the service industry.

Love learning about cocktails, making your own syrups, and non-alcoholic alternatives? Definitely join us for conversations like these in our Facebook groups! We have two groups, one for cocktail lovers and bartenders alike and one geared specifically toward industry professionals. We can’t wait to hear from you about what mocktails (or straight-up cocktails– we don’t judge!) you’re enjoying these days. And don’t forget to check out our store for all the tools you need to make your drinks, alcoholic or not!