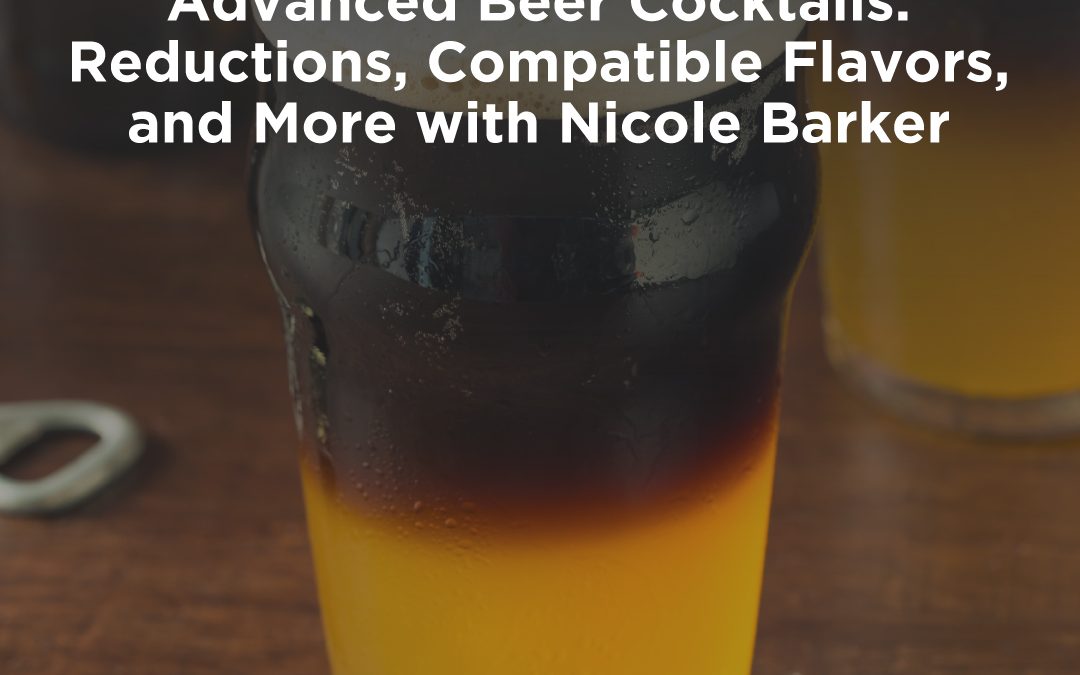 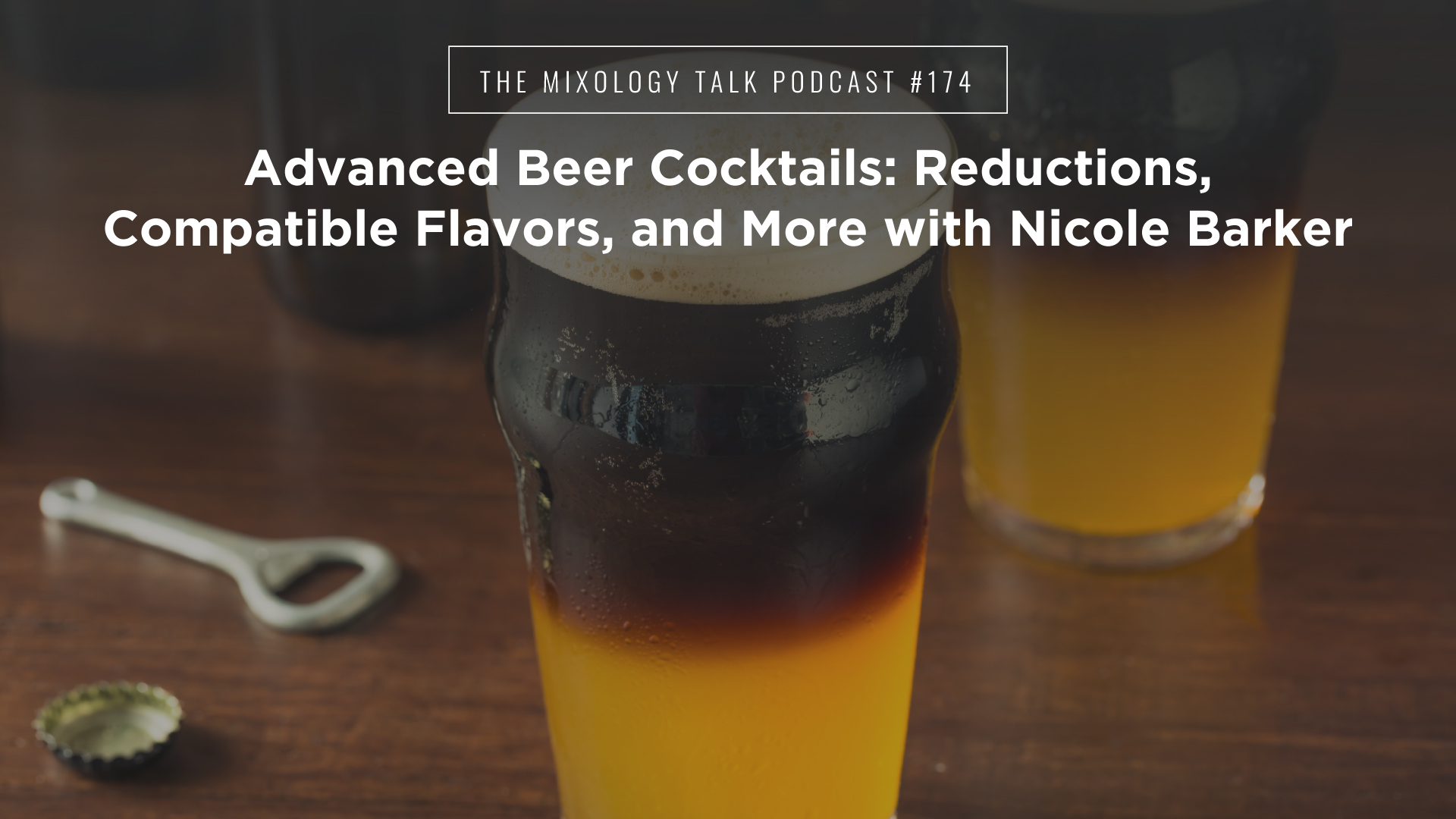 We are continuing Beer Month by narding out with bar and marketing consultant Nicole Barker about all things beer cocktails. From the best types of beer to use to issues of water and dilution, we have you covered.

A Note from Chris:

We had this podcast prior to the pandemic that has unfolded over the past few weeks. I know this topic is probably not the most urgent thing on your mind, but we wanted to publish it anyway since it is full of great information.

Please know that we are working hard to create content that can help those that have been greatly impacted in the hospitality industry. COVID-19 Hospitality Resources

Nicole Barker has been a member of the service industry for 20 years; she owns a cocktail catering company and a consulting agency and is opening her own bar in Reno, NV this summer. However, Nicole’s true passion is training, and she is currently developing an online comprehensive bar curriculum called Happy Bartenders Thrive!, which will be available later this year.

Nicole lives in Reno with her two children and is happily engaged. She loves to travel, spend as much time at the beach as possible, draw, and paint, and she can’t get enough of creative writing. Her main objective in life is to be happy helping people who help themselves.

Nicole offers an array of tips, so if you want to get into on something specific, use these timestamps:

So Where to Start With Beer Cocktails?

This advice really works with any drink you’re creating: Reverse engineer your cocktail! What does that mean? Well, it’s a simple, two-part process:

Nicole actually researches a brewery and then uses that info to decide on ingredients for her cocktails. Where did the brewer grow up, and is there an ingredient that place is known for? It’s not all about taste! This develops a story to tell your guests, drawing them into the drink.

As Nicoles puts it,

Watch Out for the Water!

The cool thing about adding beer to cocktails is how much flavor you can introduce. But here’s the tricky part about making beer cocktails: Since beer is 5-13% alcohol, the rest is water.

“The trouble with beer cocktails is the water. […] You don’t have the syrup density to kind of balance out that watering agent, and so when you’re adding beer to a cocktail […] you’re diluting every component of the drink; and when you do that, as soon as you put too much water in a drink, you lose your citrus, you lose your syrup, you lose that tight pop that you have in a sour.” –Nicole Barker

Back down on the alcohol a little when working with beer:

Nicole talks a lot about the issue of water in beer cocktails, so I highly recommend jumping to minutes 3:50 and 17:15 for in-depth advice about how to work around the water content.

When working with beer syrups, replacing the water with beer is going to give your cocktail more depth of flavor. In our other podcast this month, bartender Chris Krause had some awesome advice about reductions and syrups. Nicole also loves making syrups, but she has more advice for making them taste the way they should:

“A cooked syrup is going to taste differently. As soon as you cook the beer, you’re removing the alcohol, you’re reducing it out, but you’re also intensifying that base level of flavor. So I definitely recommend when you’re doing it to do it by itself first […] before you add any flavors to it, before you mess with it. Because you really need to understand how those are different. So taste the beer next to the syrup and realize which ingredients come forward. Because when you’re working with […] anything in a hot profile, the bittering agent, when you add heat to that, it’s going to break down the mitochondria […] and it can go really bitter, really bad.”

Nicole’s Favorite Beers to Work With

A light pilsner is easy to pair with something like strawberry, according to Nicole (our other beer cocktail expert, Chris Krause, isn’t as big of a fan of using pilsners, so just remember to experiment for what works for you and your guests).  One of Nicole’s favorite syrups she makes uses Trumer Pils instead of water and strawberry purée. Something simple can be really delicious and bring a lot of flavor to your cocktail! (I really want to try this now; how about you?)

An acquired taste for many, you have to know your audience with sours. But Nicole says they work really well in beer cocktails as an added element. That’s right: You can’t replace the citrus component of your existing cocktail, so you are layering (and adding alcohol, too, so be careful!). As Nicole explains:

“You have to have that layer in there to fortify. You should be using the beer as […] a weak component in your drink, not as a replacement for a sour. You can’t just pop this into a margarita.”

Nicole personally loves porters and darker beers, and she says you can do a lot with them if you don’t get too carried away. For one, the sweetness of those darker beers works really well for beer syrups (check out minute 2:10 to hear Nicole talk about how she won an Anchor Steam competition by using a caramel-porter syrup in a cocktail).

When it comes down to it, don’t be afraid to experiment with different types of beers! Go pick up something unique and play around with it. Taste it, reduce it, and find those flavors so you understand the beer’s nuances and can use them effectively in your cocktail.

Where do you start when deciding how to use a beer? Well, you should probably taste it first!

So, I had never thought of this, but Nicole recommends tasting a flat beer to get a better idea of how it actually tastes.

The Salivation Test (Say What?!?)

OK, I really was surprised by this super specific advice: Notice how much you salivate when you swish the flat beer around in your mouth.

Congrats, You’ve Made a Beer Cocktail! But is it Good?

Nicole recommends creating and tasting three drinks side-by-side. You might taste your first creation and think it’s good enough; but if you compare three drinks, you definitely know which one is best.

“And knowing which one is better is how you create cocktails that make sense in the long run and how you start to get your brain to reverse engineer from the intention forward.” — Nicole Barker

Besides doing a comparative analysis, invite other people to taste-test with you to get a sense of whether or not your beer cocktail will appeal to others (and sell to customers).

By understanding the basic building blocks of ratios (how much beer with how much liquor, etc.), you’ll create a basic go-to cocktail that you can manipulate. Once you have one cocktail you love, you can swap out the ingredients in this baseline version.

Try swapping in different beers and liquors! You’ll build your flavor palate and see what works (and what doesn’t).

Parallel flavor: When ingredients have similar profiles that brings out that flavor even more

Perpendicular flavor: When ingredients are not the same but still complement each other

Certain flavors, like rosemary, don’t need more added onto it, or else they just become too much.

Understanding the base notes of a beer will let you play with complementing flavors. This also goes back to what the purpose of your cocktail is. (Do you need something refreshing or rich and warming?).

This is a personal preference, but Nicole hates jalapeños in beer cocktails. In fact, she is very passionate about not combining spicy and refreshing elements, especially in beer cocktails because beer already contains a lot of heat. (Jump to minute 30:50 if you want to hear it in her own (very enthusiastic) words.)

Alright, are you scared off yet? I hope not, because I really want to see what you create! Beer cocktails are a unique and fun challenge, but hopefully Nicole’s advice will help get you excited and give you the guidance you need to make something amazing.

Don’t forget to post in the comments or head on over to the Craft Cocktail Club to share your delicious beer cocktails. We are a community here for each other, so come join us and get inspiration as well as support.