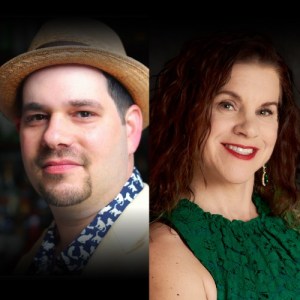 This post may contain affiliate links. Check out this disclosure for more info. Thanks for your support!

Making specialty syrups? This is your episode! We’re talking with Jared and Absinthia from Nickel Dime Syrups this week and learning all of their tricks for flavor extraction.

We’re talking about flavor extraction with some true experts on the topic: Jared Hirsch and Absinthia Vermut from Nickle Dime Syrups.

You might remember them from the shout out we gave them in Episode 144, when we visited the San Francisco Fancy Food Show and were absolutely blown away by their “Fairy Dust™ cocktail syrup. It tasted just like Absinthe, but, y’know, without the alcohol.

So how do you extract flavor without alcohol?  Listen in to find out!

But first, a bit more about our guests:

Jared Hirsch is a Mixologist, Bar Manager at Oakland’s Sidebar, and co-founder with Absinthia Vermut of Nickel Dime Cocktail Syrups. Jared is a former child actor, theatrical Lighting Designer, and Production Manager who hung up his theater robes to move into the hospitality industry.

A decade later he has won multiple awards for his drinks, syrups and bar program, including the Four Roses National Cocktail Challenge at Tales of the Cocktail, Jameson’s Movember competition, and was a finalist in Belvedere’s National Project (Red) competition in New York.

He lives with his wife Justine, their 5 year old twins Penelope and Violet and a litter of kittens who are looking for new families to love on.

Absinthia Vermut is an entrepreneur with a passion for making things that help others make better cocktails. Her first taste of absinthe was in 1996. She served her first bootleg bottles to friends a few months later on April Fool’s Day 1997, where she received the nickname, Absinthia. She continued making absinthe until suddenly one day, March 5, 2007 to be exact, the ban on absinthe was lifted. Never expecting absinthe to be legal in her lifetime, she knew she wanted to produce an organic absinthe.

In 2013, she legally changed her name to Absinthia (Vermut is on her birth certificate), trademarked it, and founded Absinthia’s Bottled Spirits, LLC in order to bring her organic absinthe to market. Finally able to sell her absinthe legally in September 2017, Absinthia™ Organic Absinthe Superieure began to appear in bars, restaurants, and bottle shops and won its first gold medal at the San Francisco World Spirits Competition 2018. Six awards and one year later, Absinthia Organic Absinthe is currently available in California, New York, and Louisiana. Absinthia is a member of the Women’s Cocktail Collective.

Absinthia, trained in the martial art Muay Thai, earned her MBA from Babson College. She lives in Oakland with her two daughters and their Havanese pup.

You can find Nickel Dime Syrups on the web, Facebook and Instagram, and find Absinthia Absinthe here on the web!