A different take on the classic Daiquiri: The Roasted Sugarcane Daiquiri

A week or two ago I received an email from an old friend. “Hey Cocktail Lady” (now there’s a title I never thought I’d have), “I recently became interested in cocktails and would like to learn some of the ‘must-try’ drinks. Do you have some suggestions for cocktail recipes I should attempt for each type of spirit?”

It’s a great question, and I was surprised to realize that we’ve never actually covered this topic on the blog. So today we’re going back to the basics. If you’re interested in trying (or learning about) classic craft cocktails, here are our top favorite recipes for each type of spirit.

Probably the easiest to guess, the Margarita is both classic and timeless. I highly recommend trying both the classic Margarita recipe and (my favorite) Tommy’s Margarita. The key difference is that Tommy’s swaps out the triple sec for agave nectar. Both drinks are excellent, but it’s worth trying both to see which you prefer.

A close second in taste but a distant second in popularity, I’d say the next drink you should try would be a Paloma. It’s as simple as it gets: Add three parts grapefruit soda and one part Tequila to a glass with ice. Done and delicious!

As far as “classics” go, Rum is an interesting challenge. I would absolutely love to send you a long list of classic Tiki drinks, but I’ve found they can be both extremely challenging to get right, and they can require a large variety of ingredients and spirits that your average beginner is unlikely to have on hand.

So I’m going to make a different, easier, and equally delicious suggestion: the Daiquiri. If you’ve been looking at the Margarita recipe from a moment ago, this recipe will look very familiar. Another simple “sour”, the Daiquiri is made with rum, sweetener and lime juice. Don’t let its simplicity fool you however: it truly is a fantastic cocktail that’s worth a try.

Also like the Margarita, playing with the sweetener can yield another great variation without too much trouble. When making our Daiquiris, we actually swap out white sugar for Demerara or Turbinado sugar instead. The molasses notes from the sugar play beautifully with the rum and add an extra layer of flavor to the drink. 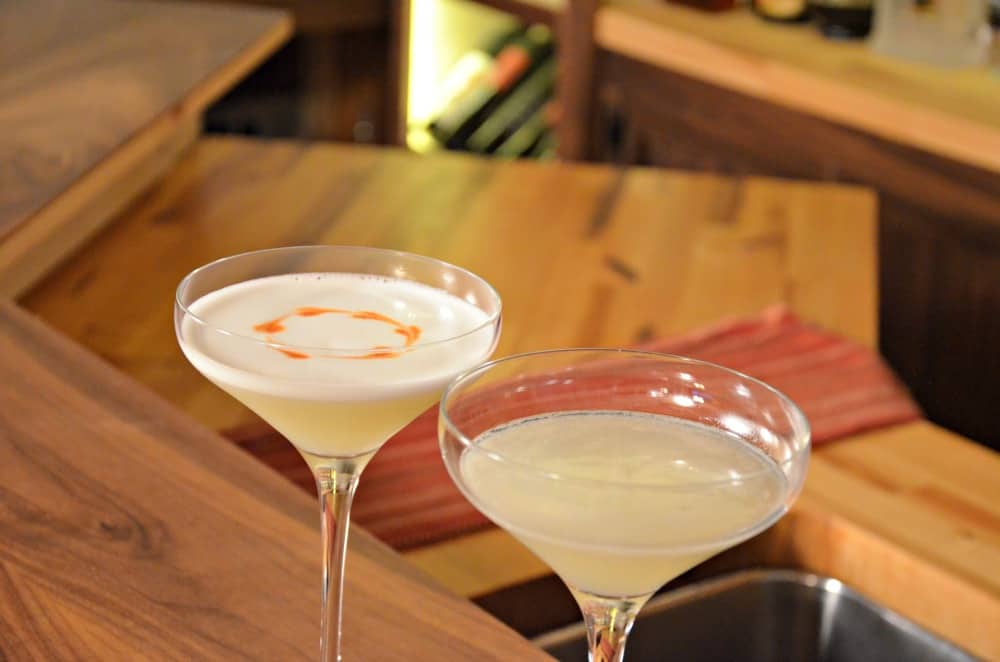 On the left: The Pisco Sour with the classic bitters design across the top.

Brandy was a very common ingredient in pre-prohibition cocktails, and there are a lot of great relatively simple recipes that I definitely recommend you try.

Spoiler: we’re posting this recipe in just a couple of days, but until then, just know that the Sidecar is – yet another – simple variation on the Margarita or the Daiquiri. (Update – here it is!)

Replace your spirit with brandy and your sweetener with triple sec, and you’re looking at a classic Sidecar.  Stay tuned for Thursday’s post for the full recipe, or just follow the classic Daiquiri recipe above and swap out the ingredients. Hint: I like to add 1/4 oz of extra triple sec in mine as well.

In my opinion, this is the classic cocktail’s equivalent of a milkshake. If you’re a fan of cream drinks (or milkshakes) then definitely give it a try. Check out the recipe here. It’s a tad more complicated than the three cocktails above, but by no means difficult and absolutely worth it.

Yep – Pisco is technically a brandy, and that means I can include it here. Made in Chile / Peru, Pisco is becoming more and more common in the US and Europe. If you have it on hand, put the Pisco Sour on your list. Now this drink does use egg whites – so make sure you’re familiar with how to use egg whites in cocktails before giving it a whirl (and use fresh, clean eggs!) Otherwise, cut your teeth on the Sidecar above and work your way up. 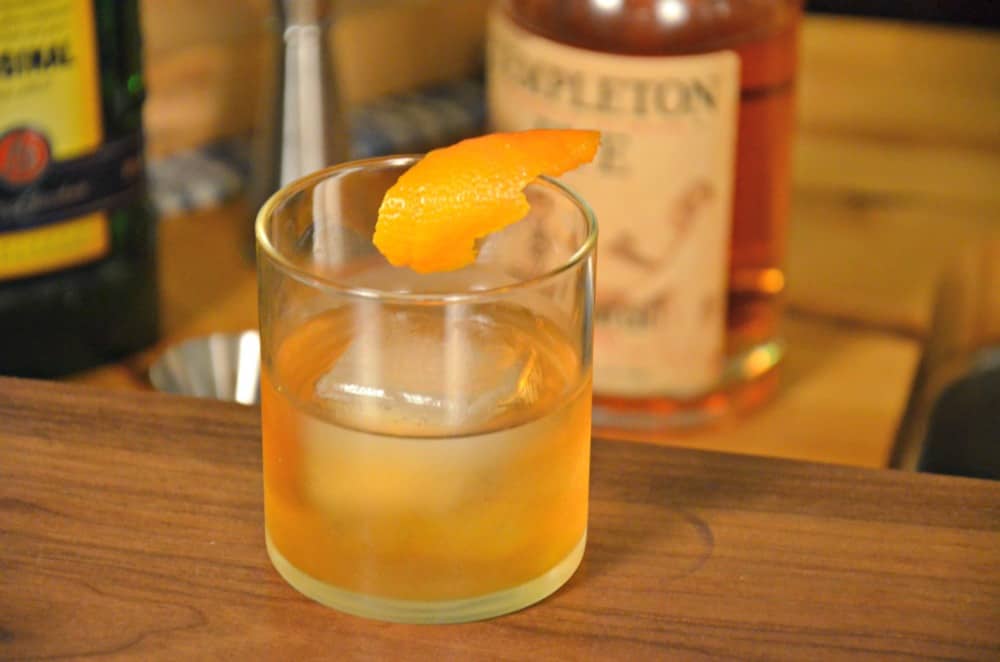 When most folks think of classic cocktails, I find they often gravitate towards recipes using whiskey. While it was less commonly used than Gin or Brandy in pre-prohibition bars, it has firmly established its reputation as a fantastic spirit base for classic drinks.

One of our favorite drinks, the Manhattan is the first on this list to feature a very common and delicious classic cocktail ingredient: Vermouth. Putting bourbon, sweet vermouth and bitters side by side creates this classic and spirit forward drink that’s (in my opinion) a drink every home bartender should know.

Ask three bartenders to make you an Old Fashioned and you’ll probably get three very different drinks. I won’t jump into the long-standing controversy about this drink, but I will recommend you give this recipe a try. Like the Manhattan, it’s a spirit focused drink with an emphasis on bitters. It’s also infinitely variable and a great recipe to keep in your back pocket.

You didn’t think I’d get through this list without adding another “sour” did you? The Whiskey sour is quite similar to the Margarita or Pisco Sour – depending who you ask. Like the Old Fashioned, there’s quite a bit of controversy on exactly how to make it. The quickest way to start a fight on Facebook is to ask several bartenders whether or not a Whiskey Sour should have egg whites! That said – make this one with egg whites or without, depending on your preference, skill and comfort level. It’s a great drink either way.

I’ve heard it said that Gin was popular in pre-prohibition days because distillation practices weren’t as good “back in the day” and the infused juniper and botanicals would help hide the unpleasant flavor of the impurities left in the spirit. Whether it’s true or not – I’ll leave that to historians and experts. But it is well known that Gin (and often “Holland Gin”, or today’s “Genever”) were staples behind the pre-prohibition bar.

Few cocktails have quite the following as the Negroni – after all, it even has its own worldwide cocktail week. This spirit forward and candy colored drink is a fairly safe order at any craft cocktail bar, and in my opinion, a great think to keep stocked at your home bar. You’ll need gin, Campari and sweet vermouth, and (if I do say so myself) this cocktail does look very sexy in an antique cocktail glass or on the rocks. If you have the ingredients, try this one out. If you don’t – well, in this case I think it really is worth a trip to the store.

A sparkling variation on the simple sour, the Tom Collins cocktail pairs gin with lemon juice, sugar syrup and sparkling water to make a bright, citrusy and herbal drink. It’s one of my summer go-to drinks and couldn’t be easier to make.

Twist my arm, OK, I will include Vodka. This spirit was nearly non-existent behind the pre-prohibition bar and really took hold of the US market in the mid 1950’s and beyond. So the “classics” with Vodka aren’t nearly as old as the recipes you have seen me mentioned above. That said, I’ll begrudgingly admit that great cocktails can be made with vodka. Here’s where I would start:

A well made Cosmo:

Believe it or not, the Cosmopolitan is actually a very, very good cocktail. That said, I will order it in very few bars. Sadly non “craft cocktail” bars have a bad habit of over sweetening this drink, using chemical-tasting syrups or (worse yet) using a Cosmo “mix”. But if you have the ingredients, a classic Cosmopolitan is a great modern classic that is worth mentioning here, and definitely worth trying.

A Mule is almost certainly one of the best ways to feature vodka in a cocktail, and the Moscow Mule is probably where this genre started. Simplicity at its finest.

Found anything on the list above that you haven’t tried? Maybe this “back to the basics” post will give you a bit of inspiration or remind you of a drink you haven’t had recently. It definitely showed us a few cocktails we haven’t had yet on the blog (and will be fixing that very soon!)

Do you agree with the list above? What classic “must try” cocktails would you add? Let us know in the comments below! 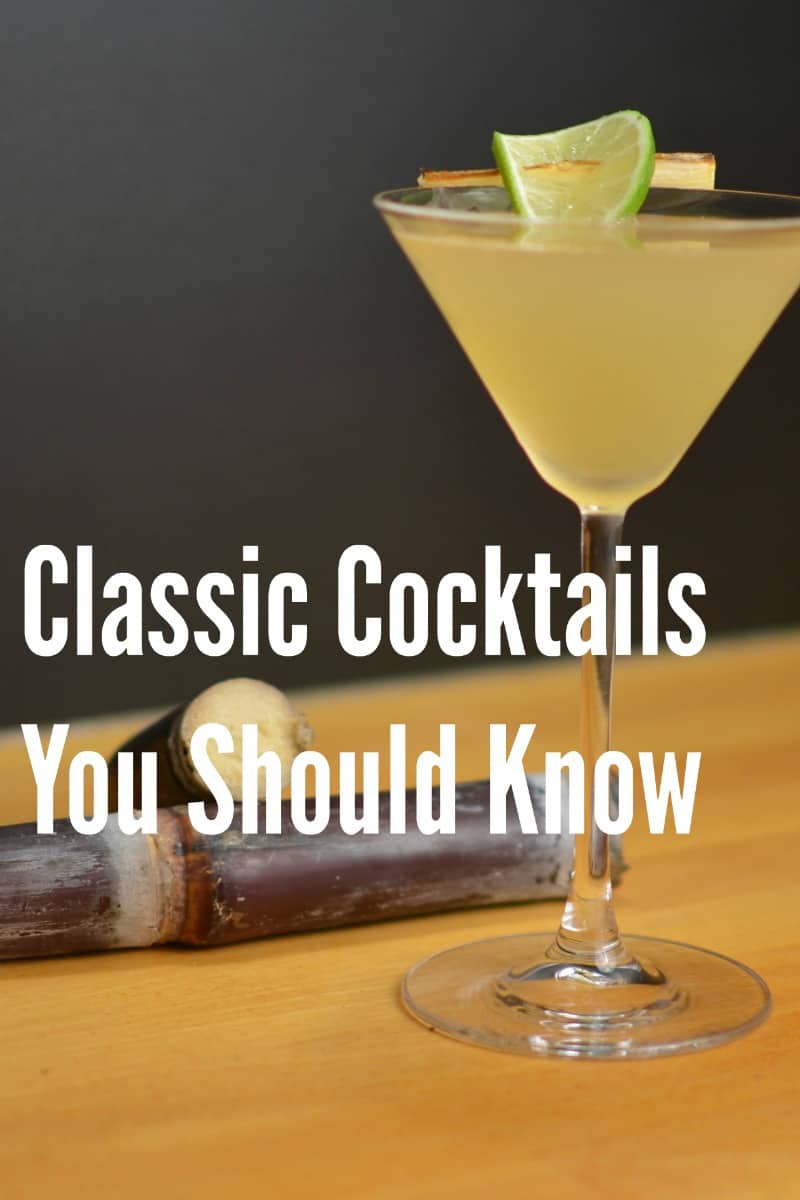