Juice a Pineapple – With or Without a Juicer

Everybody knows fresh juice is a cornerstone of mixology, and the first step for anyone looking to grow their skills as a bartender. So last week when I was preparing the Singapore and Jalisco Slings for Mixology Monday, I knew I had to use fresh juice.

I realize that other people:

So here’s a quick instructional video on how to juice a pineapple, with blender and juicer instructions.

In this video we covered:

The fundamental steps for juicing will be the same for most fruits:

If you’re interested, we’ve listed the Blender and Juice Extractor that we used in the video below in the “Resources” section.

Do you have any other ways you’ve found to juice without a juice extractor?  Do you have a different kind of Juicer you can recommend?  Let us know in the comments!

Note: some links below are Affiliate Links.

Hi, everyone! This is Chris from ABarAbove.com. I was just about ready to make a Singapore Sling and I realized that this is a great opportunity to show you guys how to juice a fresh pineapple a couple of different ways just in case you don’t have the right equipment.

So we’re getting ready to juice and I realized that, in the past, I’ve always had to use a blender to make juices, I would have to separate the solids out and then have my juices after that. It was kind of a laborious process, but I didn’t mind because I didn’t know any better. My wife saw the process and all the hard work I had to put in just to make simple syrups and juices. So for Christmas, she got me a juice extractor and, man, it has made the world the difference already. So I’m gonna break this pineapple down. We’re going to juice it in a blender and we’re also going to juice it in a juice extractor and we’re going to show you which one you’ll enjoy. But until then, I’m going to show you how to break down this pineapple and get ready for juicing.

So the first thing you want to do when you break down this pineapple is to first take off the top, separate the two. So this is a fun little hat for later, which we’ll keep. The other thing is, you’re going to do a lot of cutting so you want to create a very flat base here. Now that it’s a little flat, you’re just going to shave down the sides here and get it ready for juicing… Now one of the things you’ll notice is you’ll have a lot of the brown segments on here, you’re going to want to go all the way down past that… So there we have it: we have a nice, trimmed piece of pineapple. We’re just going to cut it in half for the two different processes. Now the other thing you want to do is make sure that you cut out the center of the pineapple. So I’ll go ahead and do that to both sides. Now if you’re using blender, you’re going to have them cut into smaller bits and smaller pieces. So we’ll do that now and the reason we’re doing this is just to give the blender an opportunity to succeed… And then for the juicer, you can leave it in pretty large pieces. There you have it.

So now we’re going to load up the pineapples here into the blender. Make sure you don’t drop them all over the place like I do. And do yourself a favor: make sure you put the lid back on. It gets quite messy real quick if you don’t. You’re just going to get a rough chop on it, so we’re just going to go up the series until we get to liquefy. We’re going to stand and liquefy for a little while here. And if it’s not juicing, we’re going to add a little bit of water just to get everything going. So here we go… And there you have it. And now that we have it liquefied, we’re actually just going to strain everything out through a shinwa or have a strainer here. If you’re the restaurant/bar, you’re probably going to have a shinwa or some cheesecloth, that’s what I recommend you using. And the purpose for this is just to separate the liquids from the solids. This is essentially what you’re going to be serving your guests, so make sure that it’s palatable and presentable… There it is, and so we’re just going to let it sit and drain for a while. And now we’re going in to the juicing machine here. So now we’re just going to juice the pineapple in the juice extractor here. And it’s really complicated. I’ll show you things are done here. Don’t worry you’re in safe hands. So we’re just going to load this thing up. I always feel like the Dock in Back to the Future putting beer cans and banana peels in this thing. And then you’re just going to hit this button. And there you have it: pineapple juice!

Here we have two different juices. The one on your left is going to be the blender, the one on your right is going to be the juice extractor. I guess you can see the clear difference of the two already: the one on the blender is obviously a lot more volume and some of the things you might not be able to see at home is that there’s a lot more solid material in this glass than the other. I have strained this out just about a minute or two ago and it’s already reduced in volume substantially. So one of the other things is that when tasting it the one from the blender is a lot more foamy, it’s a lot more aerated than the one from the juice extractor, which just tastes richer and juicier and it just tastes like juice. So for the amount of effort and the final product, the juice extractor is definitely for me the way to go.

Now that we have our pineapples juiced and our cocktail made, I’m going to go ahead and drink this delicious beverage and wish you guys have a great shift. And we’ll see you next time! 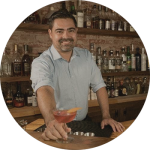