How to Comfort A Depressed Customer 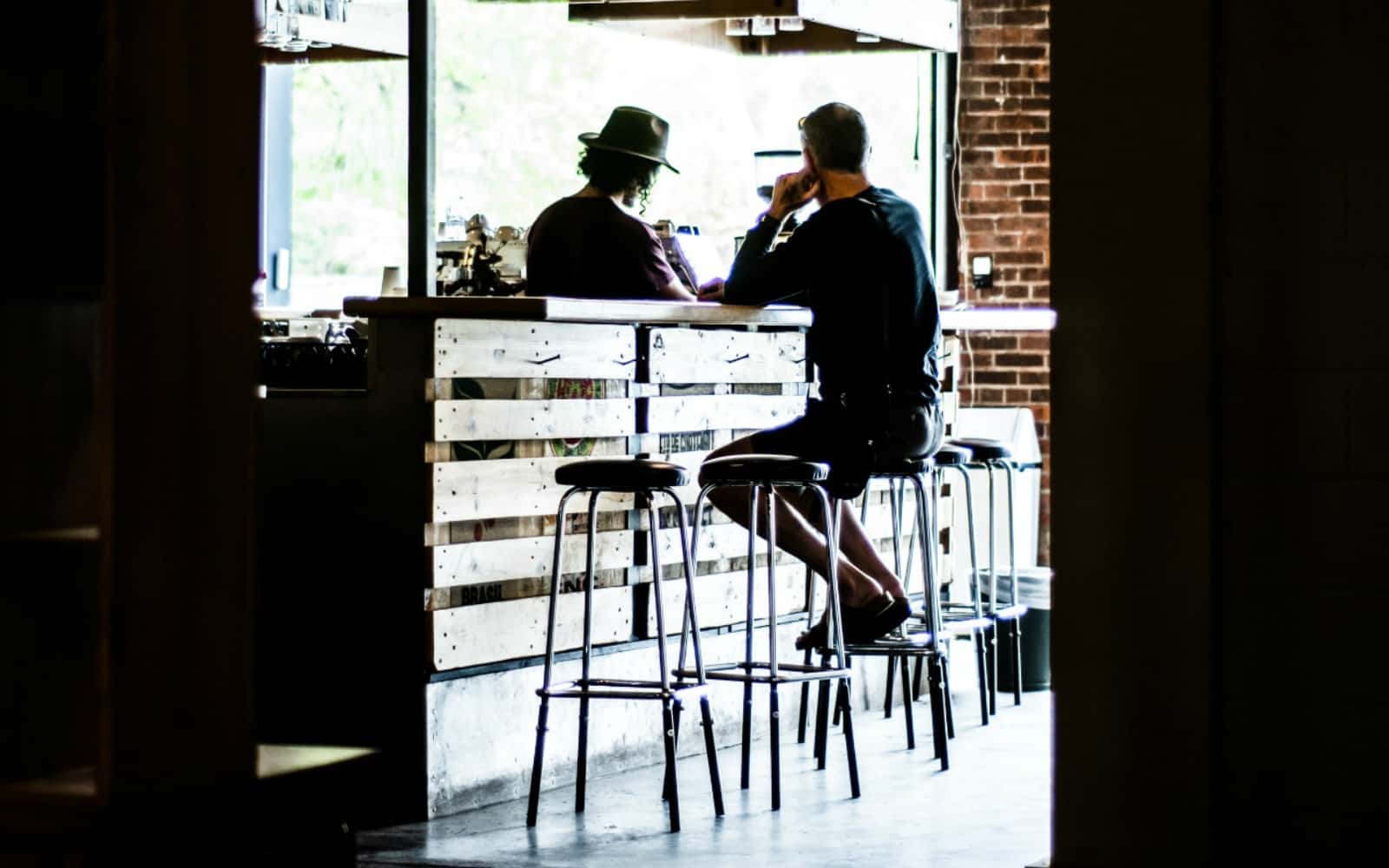 His head hung low as he pushed open the front doors and took a seat at my bar. It was 4:30 p.m. and we still had half an hour before we were officially open.

“I’ll have a Glenlivet on the rocks.” He stated without glancing up.

I was polishing our wine glasses, and not in the mood to serve anyone earlier than necessary because I still had a lot of setup work to get done, but something about his tone made me realize he needed more than a drink — he needed comfort.

“Is Glenlivet 15 OK?” I asked grabbing the only bottle I had stocked in my bar.

He nodded in agreement.

I quickly dropped a few cubes into a rocks glass and measured out a two-ounce pour.

By the time I brought it over to him, he had his card ready. “Keep it open,” he said, gesturing for me to take it.

At first, I tried to let him be, and continued wiping down the glasses. But, there was an aroma of sadness in the air, and the silence quickly became uncomfortable.

“So, what brings you in today?” I questioned.

He flashed me a look of uncertainty, and stared straight ahead for a minute before breathing in deeply.

“My wife is leaving me. We have four young kids, and I’m afraid t-t-t-hings are going to get messy. I hate my job and I feel like I’m too old to make a transition. I don’t know how to live life on my own anymore. I hate how my life has turned out. I just want to disappear.”

He looked down, and swirled his cup around gently. The ice clinked against the glass before it broke into two pieces.

My heart dropped. I was immediately grateful I wasn’t rude to him, or dismissive. This was a man placed in front of me who clearly needed someone to listen to him and acknowledge his presence.

I immediately stopped polishing the wine glasses and gave him my full attention. I knew we only had 20 to 30 minutes of uninterrupted conversation before happy hour patrons started coming in, and I wanted him to know he mattered.

I felt an instant sense of gratitude while listening to him talk about his life and problems because I realized we as bartenders are so lucky. Sure, we get to network, have fun, meet interesting people and make a good living — but, we also get to help people, and learn about the most intimate parts of their lives, and that’s a beautiful and intimidating part of our job.

If you ever come across an unhappy or depressed customer while you’re slinging drinks, here are 4 things you can do to help uplift their spirits.

One of the kindest and most impactful things you can do for someone who isn’t in a good mental place is to listen to them.

Depressed people often feel overlooked, unheard and unimportant. But, you have the ability to change that — at least in your bar.

In this case, nonverbal communication is huge, after all, the majority of our communication is nonverbal. When you’re listening, nod when appropriate, use your facial expressions to react, maintain eye contact (this will tell them they are important, and their message is being heard), push away distracting thoughts and don’t try to come up with a response to their story, instead just be in the moment, and use small verbal comments such as “yes” and “uh huh” to encourage them to continue talking.

The goal here is to offer your ears to someone who needs them, in exchange for their voice and their story.

If they’re pouring their heart out to you, let them speak and don’t try to one-up them with your own stories of struggle and challenges UNLESS doing so will directly guide or help them in some way.

For example, after the customer in the story above told me about his impending divorce, it wouldn’t have been appropriate for me to say, “Oh, I completely know what you mean. I’m going through a similar breakup right now, but it’s much worse because we’re still living together and he doesn’t have a job and depends on me. It’s not easy.” While I might also be going through a hard time, that doesn’t mean my struggle is greater than his, and such a comment would be belittle his struggle, his story and his voice.

However, if I had also gone through a divorce myself and could relate to him on several levels, then once he finished speaking it would be appropriate for me to offer some insight into my own experience without diminishing his because this would build a bond of trust and a connection between us.

Here’s an example of how I could do that:

“I’m so sorry to hear about your divorce. I’m sure things feel overwhelming and chaotic right now. I went through a divorce a few years ago myself, and it’s hard. Do you have a lot of family members and friends who are around to support you right now?”

While I do insert my own experience, I don’t spotlight myself. Instead, I redirect the conversation to him and his experience. This enables us to continue focusing on him, but opens the floor for him to ask me questions about my experience and divorce if he wants to.

Encourage Them to Limit Their Alcohol Intake

I know, I know. This goes against every rule in the bartending book. Usually, we’d encourage patrons to have another round or upsell them on an extra shot of liquor because afterall, we work for tips.

But because alcohol is a depressant, it’s not good for someone who’s in a negative emotional state to consume because it typically makes things seem much worse and more hopeless than they really are.

So, rather than trying to sell them on more booze, offer non-alcoholic alternatives such as mocktails, juice or soda. If your bar serves food, recommend some tasty dishes that will make their taste buds dance with delight.

The whole point is to make them feel better, not worse. Ultimately, you want them to leave your bar sober and hopeful, rather than drunk and hopeless.

Do Something Nice For Them

A small act of kindness can make a big difference to someone who’s feeling down.

Ask your manager if you can buy your customer an appetizer or offer them a discount. If your bar doesn’t allow comps or discounts, then simply write a nice note on the customer’s check.

Something such as, “Things will get better” or “Everything will be okay. Take things one day at a time. ”

Whatever inspires you, or feels appropriate, write that — it won’t be a big effort on your part, but it will make a big difference to the person receiving it.

As the conversation winds down, let the customer know you appreciate them sharing their story with you, and you know it wasn’t easy. You can also let them know what days you work, and invite them to come back and talk to you whenever they’re around — you may end up making a new regular or even a new friend. 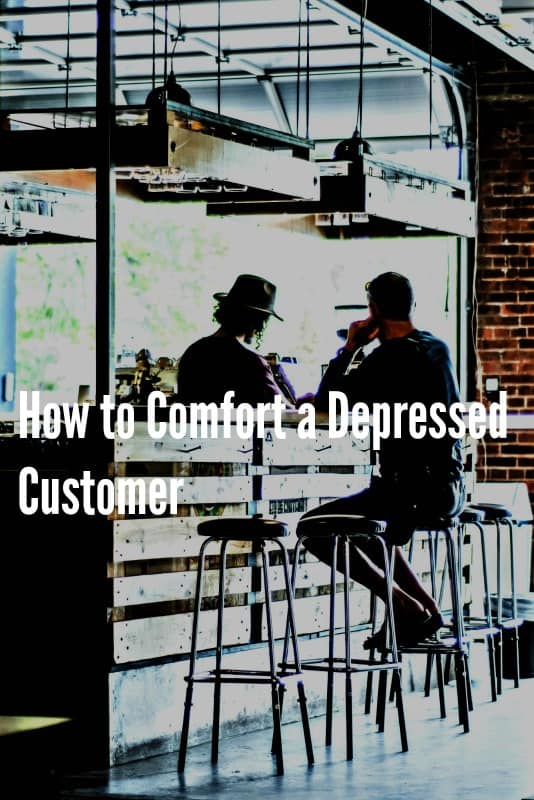