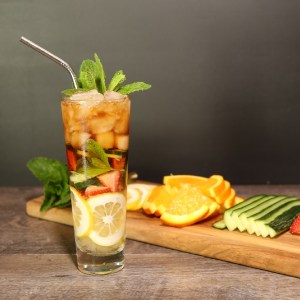 Unlike the Mint Julep, the Pimm’s cup is a light and low alcohol cocktail, which is a perfect choice to enjoy all day long. (In fact over a 2 week period, over 40,000 pints of Pimm’s Cups are served at Wimbledon alone!)

The Story of the Pimm’s Cup

The history of this drink is very well documented, and starts in the financial district of London around 1832. Around this time a fish monger turned restaurateur began serving his guests a homemade gin and herb infused concoction simply known as the “No 1 cup”. It was originally sold as a digestive aid and quickly became very popular.

In 1865 the first bottle of “Pimms” was sold and in 1870 the brand began to be recognized all around the world. The brand’s growth is largely thanks to the company’s new owner, Horatio Davies: he generously gave free bottles to key members of the military and they brought it along as the British continued their colonial expansion.

In the 1930s the brand added new formulas to their lineup. The original, “Pimm’s #1” was made with Gin. Their new formulas were made with other base spirits:

Today, most of these other styles of Pimm’s have been discontinued, but we can still enjoy the original in this classic cocktail, the Pimm’s Cup. And here is how you make one:

How to Make a Pimm’s Cup: