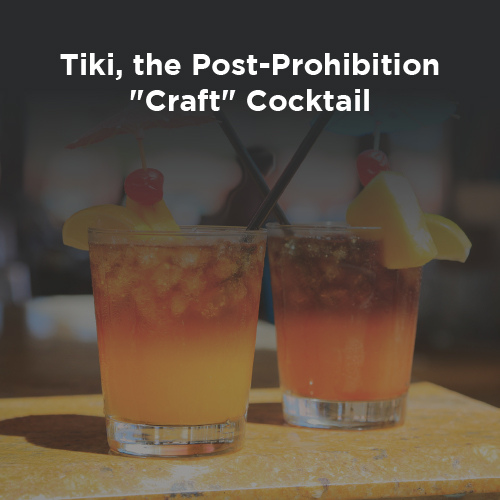 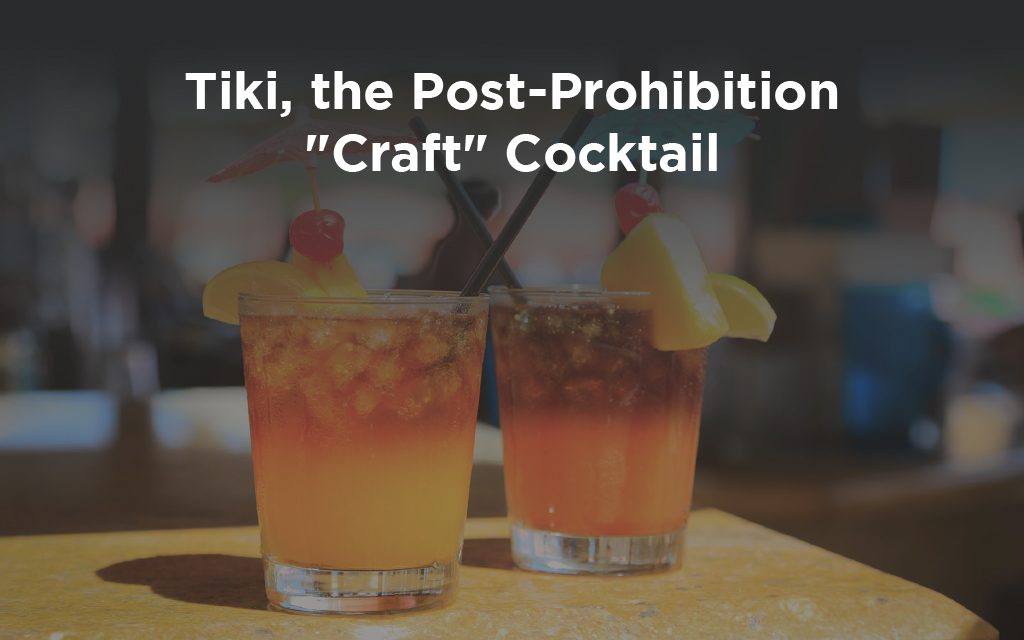 Welcome back! This month, we are talking all about Tiki Cocktails. And who better to talk to than Jeff “Beachbum” Berry, author of seven tiki cocktail books, owner of Latitude 29 in New Orleans, and all-around expert in all things “Tiki”?

It seems appropriate that we are focusing on tiki during this time of uncertainty, since tiki bars have persisted through four decades, founded on bar-goers’ need for escapism. Since many of us won’t be traveling anywhere this summer, I know I could personally use a little “faux” vacation as the weather warms up.

Get ready for a super interesting history lesson that makes you want to go out and buy all the rum!

Jeff “Beachbum” Berry is the author of seven books on vintage tropical drinks and cuisine. Cited as “the Indiana Jones of Tiki drinks” by the New York Times and “a hybrid of street-smart gumshoe, anthropologist and mixologist,” Jeff’s original cocktail recipes have been printed in publications around the world. With Martin Doudoroff, Jeff co-created the Total Tiki app, and he owns the restaurant Beachbum Berry’s Latitude 29 in New Orleans.

Beachbum Berry is probably the foremost living expert in tiki cocktails and a big reason for its resurgence in popularity, so we’re pretty excited that he took the time to speak with Chris.

After going to the Chinese restaurant Ah Fong’s (which used to be the tropical-themed restaurant the Bora Bora Room) as a child, Jeff always had a fascination with the idea of these tropical establishments. He describes his experience as mostly being in the right place at the right time and meeting the right people, with his journey beginning in Los Angeles in 1980. Although he felt like he was the only person who could possibly be into tiki, he slowly met more people who were embracing the culture.

“All these old punks and underground types were disenchanted, and they started swinging the pendulum all the way back to the 1950s and 60s. And you had all these people listening to Rat Pack, you know Dean Martin and Frank Sinatra, doing swing dancing, doing rockabilly stuff, getting into hot rods [..] Any alternative pop culture thing from that period, people started getting into, including the music, what they called lounge music […] but that also was the exotica tiki records like Martin Denny and all that. So there was this big tent of retro culture people, all alternative culture people, who were not mainstream, who were getting interested in all that stuff. There was an umbrella term called the ‘lounge core,’ and tiki was just one element. […] But gradually, the tiki part went on to form a subculture of a subculture, and then you had, for lack of a better term, ‘tiki-files.’” –Beachbum Berry

As this alternative culture grew throughout the 1990s, Beachbum Berry began making cocktails at parties and writing down his recipes in a little book to share with people. In 1998, he published his first book, Beach Bum Berry’s Grog Log, through a comic book publisher who had gotten a hold of one of his recipe print-outs.

From there, he sought out older bartenders who worked with Donn Beach and Trader Vic (and cracked their recipe codes!), and Jeff continued writing books and fostering a new love for exotic cocktails and culture. I seriously can’t do justice to his fascinating explanations of his adventures, so definitely jump to minute 24:55 to hear his stories in his own words.

To say Beachbum Berry is a wealth of information about tiki cocktails, the history and evolution of tiki, and the resurgence of this cocktail culture would be a vast understatement. (Seriously, do yourself a favor and go to minute 48:19 to hear the story of how the Suffering Bastard cocktail may have helped win WWII) He has so much amazing information for us! Did you know tiki was a craft cocktail movement way before its time? Because I sure didn’t!

“Tiki drinks were the first post-prohibition craft cocktails. The people making them in 1934 all the way up through the 70s for the most part, […] Don the Beachcomber […] and later trader Vic, they used only fresh-squeezed citrus, they had their own in house syrups and tinctures, they had their own pre-mixed syrups and in many cases liqueurs. Very inventive, forward-thinking. You could say Don was the first practitioner of farm-to-glass cocktails in California.” –Beachbum Berry

I’m not even going to try to sum up the background that Jeff so eloquently explains, so make sure to listen to the podcast for his colorful stories on how the tiki culture began and has progressed over the last nine decades.

Here is a basic breakdown of tiki’s timeline:

1934: Donn Beach opens Don the Beachcomber after Prohibition ends in 1933.

1940s: The U.S. was out of the Depression but entered WWII; Americans turned again to tropical drink bars as a “mini-vacation,” as Beachbum’s friend, Robert Hess terms it.

1950s: Exotic cocktails were still going strong through the paranoid time of Eisenhower’s presidency, the fear of atomic bombs, and the McCarthy era.

1960s: A post-war economy brought an even greater boom in the popularity of high-end tiki bars and restaurants.

1970s: With the Vietnam War, fantasizing about the far East was no longer desirable.

1980s: True cocktail culture had died out; your options were pre-packaged mixes, canned cocktails, and sweet and sour mix instead of fresh citrus. (Many bartenders refer to this as the Dark Ages of cocktails.)

1990s-2000s: Beginning in the late 1990s, tiki culture had a resurgence (in great part thanks to Beachbum Berry and his books!) that is still growing today.

SO WHERE ARE WE NOW?

Beachbum Berry travels a lot and keeps his finger on the pulse of today’s craft tiki culture, and he’s excited about how the modern craft cocktail movement is coupling with tiki. We have  ingredients now that weren’t available to Donn and Vic in the 30s and 40s, but Jeff thinks the experimentation of today’s bartenders is right in line with Donn’s ingenious spirit.

Craft tiki cocktails have grown into a respected genre when they were once considered slushy, syrupy drinks (thanks, 1980s!). And as with all craft cocktails, the movement is growing with creativity every year. So what is Jeff seeing now? Spices! Thai and East Indian spices are driving this style of cocktail forward. Jeff’s prediction: Look to Latin American culture and Amazonian fruit for what is coming next.

WHAT’S SO GREAT ABOUT TIKI ANYWAY?

There seems to be a nostalgia and whimsy associated with tropical drinks that keeps the movement going strong. If you’ve ever been to a true tiki bar, you know it isn’t just about the cocktails themselves. As Beachbum Berry explains,

“It took off because there was another dimension to all of this, which was the atmosphere of the bar itself. Donn decorated the bar with all of these polyneasian artifacts from his travels […] he created this exotic, transportive, little sort of Hollywood set atmosphere […] the atmosphere was probably over 50% of it […] in a time when we were going through a crisis like we are now.”

If you haven’t really experienced the new era of tiki, I highly recommend going to one of the many fabulous bars all around the country when they reopen. Until then, if you’re like me and are totally fascinated by Beachbum Berry’s recountings of tiki’s rich history and evolution, pick up one of Jeff’s books or try the Total Tiki app.

Make a tropical cocktail and dream of that vacation you can’t take right now. Will you make a Navy Grog (Jeff’s personal desert island cocktail) or perhaps a Zombie? Whatever your creation, we want to see it! Share it with us in our Facebook community, and don’t forget to head to our store to pick up one of our muddlers at 20% off (and everything else you may need… or want) so you can make your new favorite cocktail!